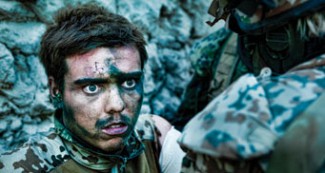 Armadillo took audiences by surprise at this year’s Cannes Film Festival when it became the first documentary to screen in the Critic’s Week competition, then took the top prize in that section. The film follows Danish soldiers fighting the Taliban in the Helmand province of southern Afghanistan. We’ve grown accustomed in the last decade to depictions of improvised explosive devices, missile strikes and other remote control warfare. But in Armadillo (named for the platoon’s base camp) we’re plunged into close combat that evokes wars of past eras, particularly Vietnam.

Director Janus Metz maintains a sophisticated visual flair that’s rarely achieved in such extreme conditions, while building the film around distinct characters within the platoon, such as the boyish Mads &”8211; whose middle class family expected him to keep peace in Kosovo, not fight in Afghanistan &”8211; and the more battle-hardened platoon leader, Rasmus. Through their six-month tour of duty we witness how war transforms different personalities. Metz draws closer and closer to these soldiers, with an intimacy equal to a work of fiction. That blurring of lines forces the question: what does the viewer seek in a war film? Political insight or human drama? Condemnation of brutality or celebration of valour? Armadillo prompts these questions while leaving it to the audience to determine their own answers.

Armadillo has already stirred political debate in Denmark over the rules of engagement and raised calls for a military investigation. The film raises discussion on many levels: how recruits are conditioned to become warriors; how the international force conducts itself in Afghanistan; how an insurgency defies technical superiority; and how soldiers grow addicted to the adrenaline of war.

For such a small country, Denmark has turned into something of a documentary powerhouse, with works such as Ghosts of Cit&”233; Soleil, Burma VJ and now Armadillo. Trend-watchers are bound to compare Armadillo to this year’s Sundance award-winner Restrepo, which focuses on American troops in Afghanistan. But Armadillo moves the consideration of this conflict in a more controversial direction. The ripples of debate that started in Cannes are about to hit North American shores.

About the director:
Janus Metz was born in Denmark and received a master’s degree in communication and international development studies from Roskilde University. He worked as a documentary researcher before moving to South Africa, where he worked on the television drama Soul City and made his debut documentary short Township Boys (06). His feature documentaries include Love on Delivery (08), Ticket to Paradise (08) and Armadillo (10).