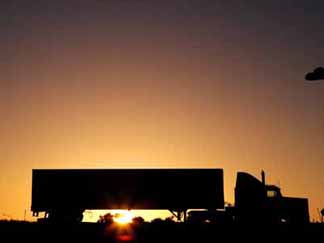 BIG RIG is a broad portrait of modern America as seen through the eyes of long-haul truck drivers. Spanning 21,000 miles, 45 states, and dozens of truck stops, director Doug Pray and producer Brad Blondheim (the team who created SCRATCH) went far beyond just the chrome and coffee culture and made a film that delves deeply into the lives and personal struggles of these working-class heroes, who are, literally, carrying the nation upon their backs.

From the opening scene at New York City’s Hunt’s Point Market, where semis arrive at 3am to feed the Northeast, to California’s San Joaquin Valley, where all that produce came from, BIG RIG is the ultimate road-trip movie. And though it is filled with gorgeous roadside vistas, it is really about the people you meet along the way. Like Jessie, a Mississippi driver who is battling Graves disease while his son fights in Iraq; or Loretta, a mother from Ohio who carries a concealed weapon in her cab for fear of truckstop violence; or Ron, a native-American who uses his 18-wheeler to visit tribes throughout the country while delivering vinyl; or Bear, an Idaho steel-driver whose love of country has him wanting to overhaul our government, to name a few. All of them are fiercely independent souls who, as one young driver says, “represent the last of the spirit of the American cowboy… it’s a dying breed out there.”

Read more about BIG RIG and view the trailer here.