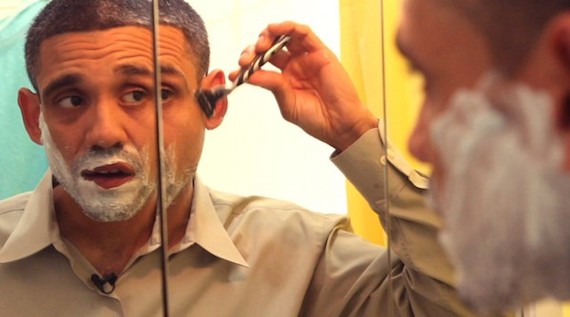 NYC PREMIERE. When Louis Ortiz shaved off his goatee one day in 2008, his life changed forever. He looked in the mirror and he didn’t see himself – a middle-aged, unemployed Puerto Rican father from the Bronx. He saw the face of change, of hope… of money. Bronx Obama tells the strange and improbable tale of a Barack Obama impersonator who tries to cash in on the “look of a lifetime” and chases a fevered American dream from opportunity to oblivion.

Filmmaker Ryan Murdock’s debut feature film has been in the making for nearly 3 years, as he intimately documented Mr. Ortiz’s transformation during Obama’s first term and the 2012 election season. Murdock has rolled out this story in multiple parts – first as a 36-minute radio piece for NPR’s This American Life, then as a short film for The New York Times. The 90-minute feature documentary reveals a host of new characters; a manager who pushes Louis hard to “become Obama,”  a seasoned “Bill Clinton” who dispenses advice, and a hard-working “Mitt Romney” who bets it all on his newfound career. Murdock captures unexpectedly hilarious moments along this Twilight-Zone-esque campaign trail while delving deep into the question of what it means to be someone you’re not.