ENCOUNTERS AT THE END OF THE WORLD 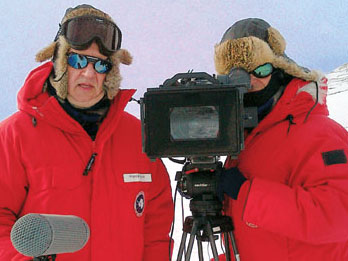 The South Pole has lured scientists, adventurers and eccentrics like a magnet, ever since Ernest Shackleton ventured there a century ago. It seems inevitable that Werner Herzog should make his own South Pole exploration. In documentaries such as Grizzly Man, Little Dieter Needs to Fly, Lessons of Darkness and many others, Herzog has proven to be our cinematic poet laureate of men (and occasionally women) living in extremes. In Encounters at the End of the World, Herzog travels to the Antarctic community of McMurdo Station, on Ross Island, the headquarters for the National Science Foundation and home to eleven hundred people during the austral summer (October to February.) Beyond the settlement, he ventures through a science-fiction landscape, from the under-ice depths of the Ross Sea, to the brink of the Mount Erebus volcano.

Over the course of Herzog~s journey, nature in the wild shares equal time with human nature. McMurdo is a gathering place for people who want to step off the map or, in the words of one resident, “full-time travellers and part-time workers “~ professional dreamers.” The film~s episodic structure and Herzog~s knack for uncovering colourful characters are reminiscent of the great travel writer Bruce Chatwin (whose novel The Viceroy of Ouidah Herzog adapted for Cobra Verde).

Herzog~s encounters are alternately surreal, absurd, profound and, sometimes, all of the above. McMurdo newcomers train by covering their heads with buckets “~ to simulate blizzard blindness “~ and stumble through the snow practising life-or-death scenarios. A team of underwater scientists casually discovers three new species of life in one day. As a corrective to March of the Penguins, an expert at Cape Royds describes the birds~ aberrant behaviours, including threesomes and all-out avian madness.

Along the way, Herzog~s unmistakable voice ruminates on themes characteristic of his oeuvre, such as the mystery and malevolence of nature. At other times, he withholds commentary, leaving us to ponder sights from the end of the earth, set to a soundtrack of choral music. It~s enough to leave anyone speechless.

About the director:
Werner Herzog was born in Munich. He made his first film, Herakles (62), when he was nineteen. He went on to direct dozens of shorts and features both fiction and documentary, as well as writing prose and directing operas. His extensive filmography includes Signs of Life (68), Even Dwarfs Started Small (70), Fata Morgana (70), Aguirre, the Wrath of God (72), The Enigma of Kaspar Hauser: Every Man for Himself and God Against All (74), which won the Special Grand Jury Prize at the 1975 Cannes Film Festival, Stroszek (77), Nosferatu (78), Woyzeck (79), God~s Angry Man (80), Fitzcarraldo (82), which won the Best Director Award at Cannes in 1982, Where the Green Ants Dream (84), Cobra Verde (87), Lessons of Darkness (92), Little Dieter Needs to Fly (97), My Best Fiend (99), Grizzly Man (05) and Rescue Dawn (06). Encounters at the End of the World (07) is his most recent film.