EVERYTHING TO GAIN: A CONVERSATION WITH JIMMY AND ROSALYNN CARTER 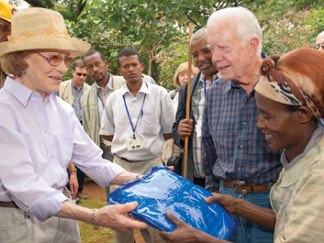 One of the most touching aspects of Jonathan Demme~s remarkable documentary Man from Plains (playing in the Festival as a Special Presentation) is witnessing the close partnership between President Jimmy Carter and his wife Rosalynn, a marriage that~s lasted over sixty years. As the film follows President Carter on his recent controversial book tour for Palestine: Peace Not Apartheid, we see him regularly check in with his wife by phone. While he gives interviews in the Midwest, she speaks on mental-health issues in New York City. As octogenarians, they~re still more productive than most people half their age. He jokes on The Tonight Show with Jay Leno about the secret to their marital success: “I don~t tell her what to do. She tells me what to do.” This year, they celebrate the twenty-fifth anniversary of the Carter Center, the Atlanta-based institution partnered with Emory University that the Carters co-founded with the mission of waging peace, fighting disease and building hope. The Festival is honoured to mark this anniversary by hosting the Carters for this Mavericks conversation about their work.

The Carters emerged as community leaders in Georgia as Jimmy went from running his family~s seed and farm-supply company to being elected Governor of the state in 1971. They entered the White House in January, 1977, with more humility than grandeur, exhibited in simple gestures like the President~s habit of carrying his own bags. His term included key treaties with Panama and the Soviet Union and a renewed commitment to human rights at a time when the United States was suffering the aftershocks of the Vietnam War, Watergate and CIA abuses. Among his lasting accomplishments was the brokering of a peace treaty between Egypt and Israel in the Camp David Accords. (Mrs. Carter vividly recounts the behind-the-scenes details of that negotiation in Man from Plains.)

Allan Gregg, the host of TVO~s Allan Gregg in Conversation, will lead the Carters in a wide-ranging discussion about their post- Presidential career. In 1987, the couple candidly described the process of embarking on new ventures after the White House in a jointly written book called Everything to Gain: Making the Most of the Rest of Your Life. Their gains have been tremendous. Here~s a chance to share their lessons.