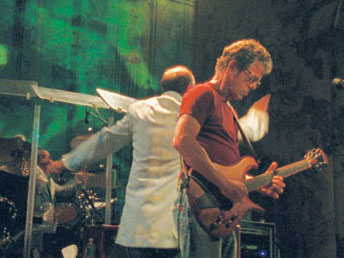 Lou Reed and his fans waited thirty-three years for the concert presented in this film. Following his glam hit “Walk on the Wild Side,” in 1973 Reed recorded Berlin, an ambitious concept album that came as a sharp and unexpected contrast. Scored with orchestral arrangements, it traced the same characters through several songs, exploring themes of jealousy, rage and loss. Harsh initial reviews dashed the hopes Reed and his producer Bob Ezrin had of performing the album live. But critical assessment went through a dramatic turnabout: tracks like “How Do You Think it Feels?” and “Sad Song” became classics; Rolling Stone, which once excoriated Berlin, now ranks it among their top five hundred albums.

So thirty-three years later, Reed and Ezrin finally got their wish: they teamed up with music producer Hal Willner (who also mounted the concert recorded in 2005, Leonard Cohen I’m Your Man) to stage Berlin in venues around the world. Julian Schnabel art-directed the staging and filmed the production over five nights at St. Ann’s Warehouse in Brooklyn, New York. (Schnabel’s film Le Scaphandre et le papillon is also at this year’s Festival, in the Special Presentation programme.) Schnabel’s daughter Lola shot impressionistic films for the performance that are projected on stage and enhance the music~s narrative elements.

Cinematographer Ellen Kuras, a concert veteran who shot Neil Young: Heart of Gold and Dave Chappelle’s Block Party, captures the action onstage unobtrusively, giving us the best seat in the house. Reed, now in his sixties, remains a totem of cool. The band is superb, joined by the haunting back-up vocals of the Brooklyn Youth Chorus. Celebrated singer Antony (of Antony and the Johnsons) comes on for a version of “Candy Says” – one of a handful of Velvet Underground songs also featured in the concert – that is performed so sweetly it brings a smile to Reed’s stoic face.

A lot has changed since 1973. The very title Berlin references a divided city that has since been reunited. Yet the passage of time makes these songs even more special and enduring. By the finale, “Sweet Jane,” it all feels very much worth the wait.

About the director:
Julian Schnabel was born in Brooklyn, New York. He graduated with a B.F.A. from the University of Houston and participated in the Whitney Museum Independent Study Program. He had his first solo painting exhibition at the Mary Boone Gallery in New York in 1979. Since then, his paintings have been included in many important public and private collections around the world. His films include Basquiat (96), Before Night Falls, which won the Grand Jury Prize at the Venice International Film Festival in 2000, Le Scaphandre et le papillon (07), which is also playing in this year’s Festival, and Lou Reed’s Berlin (07).