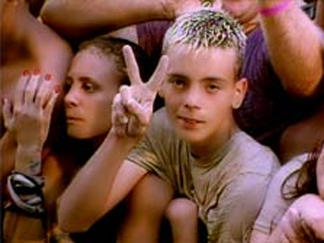 “This extraordinary film…far surpasses whatever presuppositions you may bring to the theater” – Geoffrey Gilmore, Sundance Film Festival

Barbara Kopple is a documentary virtuoso. She won two Academy Awards for her films Harlan County, USA and American Dream. Her most recent film SHUT UP & SING about the Dixie Chicks showed a keen eye for observing how popular music affects the wider culture. She explores similar terrain in this earlier work contrasting the Woodstock music festivals from the ’60s to the ’90s and what they meant for each generation.

The curly-haired Michael Lang was a key planner for all three Woodstock festivals in 1969, 1994 and 1999. Having taken a financial bath on the first one, he approaches the 25th anniversary edition with more a commercial sensibility. Barbara Kopple’s shrewdly observes the behind the scenes deal-making that says as much about the era as the music. The Woodstock brand gets licensed to everything from Pepsi cans to condoms (“I come in peace” reads the slogan).

On stage, we see performances ranging from Joe Cocker to Red Hot Chili Peppers. But Kopple’s cameras dwell more in the crowd, listening to young people searching for their own moment in history. She skillfully intercuts interviews from all three festivals to reveal differences and similarities. There’s a continuity of nudity, mud and celebration, only in the ’90s more tattoos and mosh pit injuries. Kopple pointedly reexamines footage from the sixties to reveal aspects that aren’t as groovy as the mythology. A festival organizer recalls bands in 1969 threatening not to play unless they were paid upfront. Female toplessness, often portrayed as a symbol of free expression, is shown to be influenced by a good bit of male coercion in both the 60s and 90s.

The 1999 festival with its images of looting and vandalism became easy iconography for nihilism. But Kopple goes behind those simple images to explore a more complex dynamic behind each generation’s search for meaning.

About Barbara Kopple (taken from the Cabin Creek Films website):
Barbara Kopple, a two-time Academy Award winning filmmaker recently completed a one hour television pilot, The DC Sniper~s Wife, which explores the life of Mildred Muhammad, ex-wife of the infamous DC sniper, John Allen Muhammad. It aired on TruTV in May and June 2008. Earlier this year, Barbara~s documentary High School Musical: The Music In You, which follows students in Fort Worth, Texas performing a stage adaptation of “High School Musical,” premiered on the Disney Channel. Other recent works include the feature-length documentary Shut Up and Sing which tells the story of the Dixie Chicks and their personal and creative response to the political fallout they faced after making comments critical of President Bush on the eve of the Iraq War. Shut Up and Sing premiered at a gala screening at the 2006 Toronto Film Festival before being released in theaters nationwide. Steamfitters Local Union 638, which is part of HBO~s Addiction Series premiered on HBO in March 2007. This program was awarded the Television Academy of Arts and Sciences Governor~s Award.