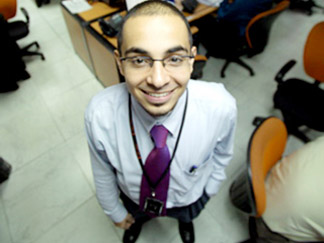 The director of BEAUTY ACADEMY OF KABUL examines another comic situation of east meets west, this time at the high-end outsourcing firm in India. The company Office Tiger was profiled in a memorable New Yorker article and later gave Mermin full access. Rarely do we get such a candid look inside a corporation. The American bosses bring a Dale Carnegie style management approach that plays out like a non-fiction version of “The Office.” The film premiered at the Toronto International Film Festival. Mermin is currently shooting a new documentary in Bombay, going behind the scenes of a Bollywood film. She’s taking a break from her schedule to make this New York appearance.