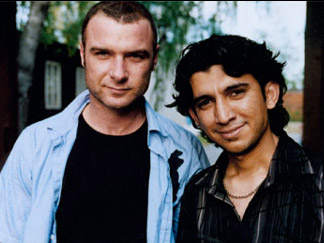 This is the story of how well-intentioned Americans try to intervene in the life of an Iraqi. And how nothing goes as planned.

Not long after the 2003 invasion of Iraq by the United States, MTV aired a documentary about Muthana Mohmed, a twenty-five-year old Baghdad film student. Muthana had a winning smile and indomitable spirit, but his film school had been bombed to pieces. American actor Liev Schreiber saw the MTV piece while preparing to direct his first feature. Feeling guilty for having so much opportunity while someone else had none, Schreiber invited Muthana to join the production of Everything Is Illuminated in the Czech Republic. It seemed like a dream come true, a story of bridging cultures, so documentary director Nina Davenport went along to film it.

Soon after Muthana arrives in Prague, the contrasts between his life experience and everyone else~s prove gaping. At night, he watches television images of escalating violence in Baghdad; by day, he listens as crew members discuss the importance of editing a gag reel. When Muthana declares his love for George W. Bush, the liberal producers are taken aback.

Living away from his family for the first time, Muthana also isn~t accustomed to taking care of himself. He has difficulty managing tasks like renewing his visa, not to mention comprehending expectations on a high-stress film set. The results are often harrowing. As Muthana starts to fear for his safety if he returns to Baghdad, his patrons reach the limits of their charity.

No one has a good exit strategy. For Davenport, what~s meant to be a month of filming turns into a year and a half. She tells this story, full of remarkable twists and turns, with a sharp eye for humour and surreal juxtapositions. Everyone~s motives are questioned, including documentary makers and their “semi-factitious” stories. What~s remarkable is Davenport~s ability to keep her subjects~ humanity in focus “~ their dreams and better inclinations “~ even as they blunder and grossly misunderstand each other. Are there lessons to be learned? The unintended consequences are too messy and situational to say for sure. But in this mix of tragedy and farce, Davenport perfectly captures the follies of our times.

About the Director:
Nina Davenport grew up in Bloomfield Hills, Michigan, and received a B.A. in Visual and Environmental Studies from Harvard University. In addition to work as a photographer, producer and camera person, she has shot, directed and edited the documentaries Hello Photo (95), Always a Bridesmaid (00), Parallel Lines (03) and Operation Filmmaker (07).

To buy the film: www.operationfilmmaker.com/contact