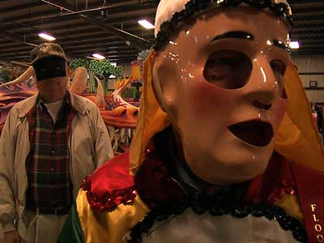 Stranger Than Fiction kicks off its 10-week Spring Season with the first New York sneak preview of ORDER OF MYTHS, one of the most acclaimed documentaries from the 2008 Sundance Film Festival. “Handsomely shot and intelligently edited,” wrote Manohla Dargis in the New York Times, “as big and richly complex as the United States itself.”

From the 2008 Sundance Film Festival catalogue:

As winter turns to spring, Mobile, Alabama, buzzes and flutters with the floats, parades, masquerade balls, and secret mystic societies of Mardi Gras. The oldest Mardi Gras celebration in America, this time-honored ritual has always been racially segregated. Filmmaker Margaret Brown, herself a daughter of Mobile, escorts us into the parallel hearts of the city’s two carnivals to explore the complex contours of this hallowed tradition and the elusive forces that keep it organized along color lines.

Taking a wonderfully restrained, observational approach that allows viewers to draw their own conclusions, Brown unveils the vibrant pageantry under way as ornate masks are donned, luminous gowns fitted, bejeweled trains painstakingly stitched, and the king and queen of each royal court trotted out at public appearances, parties, and coronations–within their distinct black and white realms, that is. Playfulness, reverence, and camaraderie suffuse the spectacles, generating genuine mirth and dignity in each community. Yet stories of a lynching as recent as 1981, and of the white Mardi Gras queen’s slave-trading ancestors, as well as subtle interracial social codes, cast a shadow on the proud Mobile heritage the white residents invoke. Do the recent formation of a racially integrated secret society and the attendance by this past year’s black Mardi Gras monarchs at the white folks’ ball augur cracks in a mysteriously enduring social order?