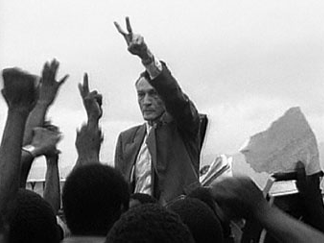 Jonathan Demme has always had a thing for Haiti. With THE AGRONOMIST, the Oscar winning director of THE SILENCE OF THE LAMBS takes his Haitian passion for a serious and considerably more personal turn in a documentary profiling journalist and radio pioneer Jean Dominique. Demme first became intrigued by Dominique in 1991 when he undertook a series of informal video interviews. He returned to his subject many times over the next decade, sometimes in Haiti and sometimes during extended periods when Dominique was in the U.S., a political exile from his homeland. When Demme began his documentary, he certainly couldn’t have planned for its end–the assassination of Dominique outside his Port au Prince radio station in 2000. As THE AGRONOMIST makes clear, it was a blatantly political crime and one that remains unsolved. The title refers to Dominique’s original vocation helping farmers in the rural communities of Haiti. He came from the upper classes, but continued his battles in representing his country’s poor and dispossessed even as his career path changed to professional broadcaster. As operator of the independent Radio Haiti Inter from 1960 until his death, Dominique became a hero to the masses and a frequent enemy of the government. In extensive interview segments, Dominique exudes the charismatic good humor and mischievous zeal that brought him fame and infamy from the various constituents of Haiti’s notorious political landscape. An impish, animated figure with sparkling eyes and naughty grin, Dominique gleefully or angrily recounts confrontations with the authority of Haiti’s Duvalier father-and-son dictators, and later the Aristide regime. … Using mostly raw camcorder video, Demme makes a stylish statement with his visuals and Dominique’s words. He also gets plenty of help from a sensational soundtrack by another beloved Haitian hero, Wyclef Jean. THE AGRONOMIST is an apt history lesson about Haiti’s legacy of political turmoil and a powerful testimonial about patriotism in the face of oppression. –Ted Fry, Amazon.com