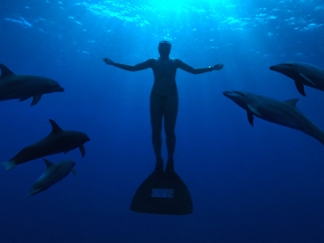 STF is pleased to celebrate the Cinema Eye Honor winner for Best Feature, Cinematography and Production and to welcome director Louie Psihoyos.

Description from the Sundance Film Festival:
Flipper was one of the most beloved television characters of all time. But ironically, the fascination with dolphins that he caused created a tragic epidemic that has threatened their existence and become a multibillion dollar industry. The largest supplier of dolphins in the world is located in the picturesque town of Taijii, Japan. But the town has a dark, horrifying secret that it doesn’t want the rest of the world to know. There are guards patrolling the cove, where the dolphin capturing takes place, who prevent any photography. The only way to stop the evil acts of this company and the town that protects it is to expose them….and that’s exactly what the brave group of activists in The Cove intend to do. Armed with state-of-the-art surveillance equipment, the members of the small group, led by the most famous dolphin trainer in the world, devise a covert plan to infiltrate the cove to document the horrifying events that happen there. Along the way, they uncover what may be the largest health crisis facing our planet— the poisoning of our seas. Part environmental documentary, part horror film, part spy thriller, The Cove is as suspenseful as it is enlightening. The final result is a heart-wrenching, but inspirational, story that shows the true power of film in the hands of people who aren’t afraid to risk everything for a vital cause. (Recipient of the Sundance Audience Award presented by Honda: U.S. Documentary)

THE COVE and STARTUP.COM come to STF