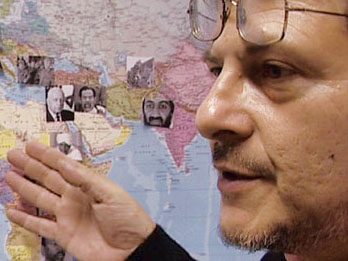 “If you kill one person, you go to jail. If you kill forty people, they put you in an insane asylum. If you kill forty thousand people, you get a comfortable exile with your bank account in another country,” says Reed Brody. He hunts dictators for a living as a lawyer with Human Rights Watch. For seven years, Brody has been chasing one ex-dictator in particular: Hiss~~ne Habr~~, the former leader of Chad, who is charged with killing thousands of his own countrymen in the eighties. Habr~~ now lives in Senegal, where Brody is attempting to have him brought to trial or extradited.

Director Klaartje Quirijns has a keen instinct for exploring international politics through the eyes of a memorable central character. Her previous film, The Brooklyn Connection: How to Build a Guerrilla Army, focused on a Kosovar arms smuggler. In The Dictator Hunter, we follow Brody over the course of a suspenseful year as he travels through Africa, Europe and the United States. He conducts diplomacy like he plays chess with his son; the chess pieces in his work are the politicians, journalists and judges that Brody positions against his opponent.

While tracking the legal drama, the film never loses sight of Chad~s victims. We get to know Souleymane Guengueng, a political prisoner under Habr~~ who fled Chad for exile in New York City, where he rebuilds his life with steadfast dignity. We see the personal bond between Guengueng and Brody, whose own Hungarian Jewish father survived several labour camps in Europe. The film is especially sensitive in its portrayal of the human side of larger political machinations.

Scenes unfold as if they were scripted for a fiction film, except that Brody~s dialogue is smarter than Hollywood~s. Here all the setbacks and victories, tears and celebrations are real. By the end we feel an enormous gratitude to Brody for carrying on his crusade and to Quirijns for capturing it onscreen.

About the director:
Klaartje Quirijns was born in Amsterdam. She has worked extensively as a director and producer for Dutch television, especially of documentaries. Her documentaries include The Brooklyn Connection: How to Build a Guerrilla Army (04) and The Dictator Hunter (07).