THE STORY OF FILM: AN ODYSSEY 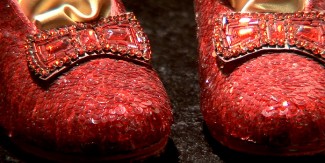 The Story of Film is a feast for cinema lovers. Mark Cousins adapts his celebrated book of the same title into this audacious fifteen-hour project, screening over multiple days at the Festival. He traces the entire history of film, concentrating on artistic vision (rather than business or celebrities) from the silent era to the digital age. Unlike historians who place an emphasis on Western cinema, Cousins takes a more global approach. He showcases iconic film clips from Asia, Africa, India, the Middle East and South America — woven into the more familiar legacy of Europe and North America. His treatment succeeds at being both erudite and accessible.

Often this kind of ambitious project requires the backing of an institution, which can result in a bland sensibility. But Cousins’ approach is more individualistic. Based in Scotland, he earned his expertise from an eclectic background of festival programming, filmmaking and teaching. For his popular BBC program and eponymous book Scene by Scene, he interviewed the likes of Martin Scorsese, Roman Polanski and Bernardo Bertolucci. Now he marshals that wealth of knowledge to narrate TheStory of Film in his endearing brogue. He supplements his commentary by interviewing cinematic history makers such as Wim Wenders, Claire Denis and Alexander Sokurov. The conversations are shot with the idiosyncratic style of a one-person crew in locales around the world.

By taking a DIY approach, Cousins preserves an editorial independence that normally gets lost with a bigger budget and committee decision-making. His achievement represents a breakthrough for the multi-part documentary. After experiencing this history from such a distinctive viewpoint, you may crave similar treatments for music, literature, politics or whatever compels you. Of course, Cousins has the advantage of drawing upon image makers who take our breath away: Buster Keaton, Carl Theodor Dreyer, Fritz Lang, Yasujiro Ozu, Satyajit Ray, Orson Welles, Ingmar Bergman, Federico Fellini, Youssef Chahine, Agnes Varda, Nicholas Roeg, Ousmane Sembene, Abbas Kiarostami — to name only a sampling. In The Story of Film, you’ll drink their visions and walk away thirsty for more.

Episode 1-3
1. The birth of a great new art form: the movies. Filmed in the very buildings where the first movies were made, this first hour shows that ideas and passion have always driven film more than money and marketing. The very first movie stars, close ups and special effects and creation of the Hollywood myth. And a surprise: the greatest — and best-paid — writers in these early years were women.

2. Movies in the Roaring Twenties: Hollywood became a glittering entertainment industry with star directors like Charlie Chaplin and Buster Keaton. But the gloss and fantasy was challenged by movie makers like Robert Flaherty, Eric Von Stroheim and Carl Theodor Dreyer, who wanted films to be more serious and mature. This was a battle for the soul of cinema. The result: some of the greatest movies ever made.

3. The 1920s were a golden age for world cinema. German Expressionism, Soviet montage, French impressionism and surrealism were passionate new film movements, pushing the boundaries of the medium. Less well-known are the glories of Chinese and Japanese films, and the moving story of one of the great, now-forgotten, movie stars, Ruan Lingyu.

Episode 4-6
4. The coming of sound in the 1930s upends everything. We watch the birth of new types of film: screwball comedies, gangster pictures, horror films, westerns and musicals, and discover a master of most of them, Howard Hawks. Alfred Hitchcock hits his stride and French directors become masters of mood.

5. The trauma of World War II makes cinema more daring. The story starts in Italy; then we go to Hollywood, discover Orson Welles and chart the darkening of American film during the drama of the McCarthy era. Screenwriters Paul Schrader and Robert Towne discuss theses years. The director of Singin’ in the Rain, Stanley Donen, talks exclusively about his career.

6. Sex and melodrama in the movies of the fifties: James Dean, On the Waterfront and glossy weepies. We travel to Egypt, India, China, Mexico, Britain and Japan to find that movies there were also full of rage and passion. Exclusive interviews include associates of Indian master Satyajit Ray; legendary Japanese actress Kyoko Kagawa, who starred in films by Akira Kurosawa and Yasujiro Ozu; and the first great African director, Youssef Chahine.

Episode 7-9
7. The explosive story of film in the late fifties and sixties: The great movie star Claudia Cardinale talks exclusively about Federico Fellini; in Denmark, Lars von Trier describes his admiration for Ingmar Bergman; and Bernardo Bertolucci remembers his work with Pier Paolo Pasolini. French filmmakers plant a bomb under the movies, and the new wave it causes sweeps across Europe.

8. The dazzling 1960s in cinema around the world: In Hollywood, legendary cinematographer Haskell Wexler reveals how documentary influenced mainstream movies. Easy Rider and 2001: A Space Odyssey signal a new era in America cinema. We discover the films of Roman Polanski, Andrei Tarkvosky, and Nagisa Oshima. Black African cinema is born, and we talk exclusively to the Indian master director Mani Kaul.

9. The maturing of American cinema of the late sixties and seventies: Buck Henry, writer of The Graduate, talks exclusively about movie satire of the time. Paul Schrader reveals his thoughts on his existential screenplay for Taxi Driver. Writer Robert Towne explores the dark ideas in Chinatown, and director Charles Burnett talks about the birth of Black American cinema.

Episode 10-12
10.The movies that tried to change the world in the seventies: Wim Wenders in Germany; Ken Loach and Britain; Pasolini in Italy; the birth of new Australian cinema; and then Japan, which was making the most moving films in the world. Even bigger, bolder questions about film were being asked in Africa and South America, and the story ends with John Lennon’s favourite film, the extraordinary, psychedelic The Holy Mountain.

11. Star Wars, Jaws and The Exorcist created the multiplexes, but they were also innovative. In India the world’s most famous movie star, Amitabh Bachchan, shows how Bollywood was doing new things in the seventies too. And we discover that Bruce Lee movies kick-started the kinetic films of Hong Kong, where master Yuen Woo-ping talks exclusively about his action movies and his wire fu choreography for The Matrix.

12. Protest in the movies of the 1980s: brave filmmakers spoke truth to power. American independent director John Sayles talks exclusively about these years. In Beijing, Chinese cinema blossomed before the Tiananmen crackdown. In the Soviet Union, the past wells up in astonishing films, and master director Krzysztof Kieslowski emerges in Poland.

Episode 13-15
13. Film in the 1990s enters a surprise golden age. In Iran we meet Abbas Kiarostami, who rethought movie making and made it more real. Then, in Tokyo, we meet Shinji Tsukamoto, who laid the ground for the bold new Japanese horror cinema. In Paris one of the world’s greatest directors, Claire Denis, talks exclusively about her work. The story ends in Mexico.

14. Brilliant, flashy, playful movies in the English speaking world in the nineties. We look at what was new in Tarantino’s dialogue and the edginess of the Coen Brothers. The writer of Starship Troopers and Robocop talks exclusively about the films’ irony. In Australia, Baz Luhrmann talks about Romeo + Juliet and Moulin Rouge, and we plunge into the digital world to see how it has changed the movies forever.

15. Movies come full circle: They get more serious after 9/11, and Romanian movies come to the fore. But then David Lynch’s Mulholland Drive becomes one of the most complex dream films ever made and Inception turns film into a game. In Moscow, master director Alexander Sokurov talks exclusively about his innovative films. Then, a surprise: The Story of Film goes beyond the present, to look at film in the future.

About the director:
Mark Cousins is a Northern Irish writer, film critic and director. His short documentary films are The Psychology of Neo-Nazism: Another Journey by Train to Auschwitz (co-director, 93), I Know Where I’m Going! Revisited (94), Cinema Iran (05) and First Impressions (08). His feature documentaries are The New Ten Commandments (co-director, 08), The First Movie (09) and The Story of Film (11).