THE TIME IS NOW: A CONVERSATION ABOUT DARFUR 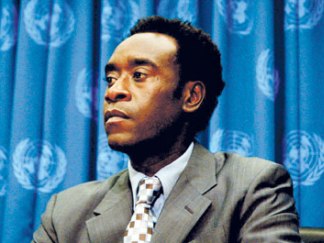 The stirring documentary Darfur Now (playing in the Real to Reel programme) looks at six individuals striving in their own ways to end the deadly conflict in Sudan. In this Mavericks presentation, we assemble four of the film’s subjects, together with key members of the filmmaking team, to discuss their actions and what the rest of us can do. They bring a wealth of knowledge and eyewitness testimony, from refugee camps to the halls of political influence to the International Criminal Court. Their stories may be enraging, but their actions are inspiring. The discussion will include the following speakers:

Don Cheadle (activist) has a wide-ranging career as an actor, including lead roles in Hotel Rwanda (04), Crash (04) and, most recently, Talk to Me (07). A prominent civilian activist for relief in Darfur, he is a co-founder of the Not on Our Watch Foundation and has co-authored the recent book Not on Our Watch.

Adam Sterling (Co-founder, Sudan Divestment Task Force) spearheaded the student campaign that persuaded the University of California Regents to divest from Sudan. He has since moved to Washington, D.C., and now leads the national campaign for divestment.

Mark Jonathan Harris (producer, Darfur Now) is an Academy Award&”174; -winning documentarian. His documentary feature films include The Long Way Home (97) and Into the Arms of Strangers: Stories of the Kindertransport (00). He is a Distinguished Professor at the University of Southern California’s School of Cinematic Arts.

Cathy Schulman (producer, Darfur Now) is a long-time producer and film executive, and is currently the president of Mandalay Pictures and Mandalay Independent. In addition to producing The Illusionist (06) and executive producing Thumbsucker (05), she won the 2006 Academy Award for Best Picture for producing Crash (04).