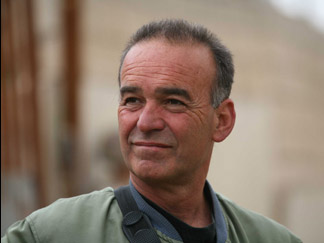 The controversial director of hit docs such as Kurt & Courtney and Aileen Wuornos: The Selling of a Serial Kller will be in New York to promote his new fiction film BATTLE FOR HADITHA. STF takes the opportunity to present him with this 1994 film rarely screened in the U.S. We see Broomfield honing his trademark style of pursuing an unwilling subject. This time his target is the 20th Century’s longest reigning British Prime Minister. Broomfield taps into British eccentricity, finding a former neighbor who inherited Thatcher’s old toilet and interviewing Christopher Hitchens who recalls Maggie spanking him with a “saucy” expression.

As Broomfield follows Maggie on a book tour of the U.S., he scratches at the more serious story of Thatcher’s son Mark who at the time was accused of shady arms dealings from his base in Dallas, Texas. Broomfield’s instincts were right on the money: ten years after the film, Mark Thatcher was arrested for fomenting a coup in Africa.