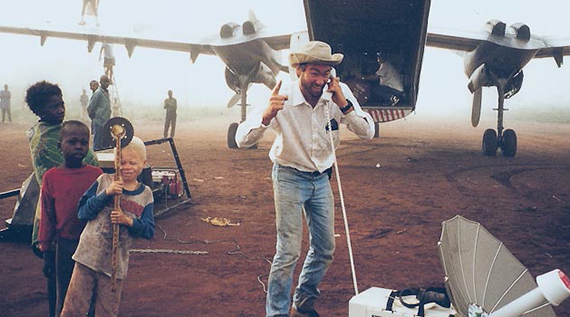 Televangelist, multi-millionaire, and leader of the religious right, Pat Robertson is a man on a mission. During an escalating refugee crisis in the Democratic Republic of Congo, Robertson took to the airwaves of the Christian Broadcasting Network to raise money for his charity Operation Blessing International. He attracted millions of dollars in donations for relief projects in the Congo. Later, he deemed the mission a success, broadcasting footage of himself being warmly embraced by children in refugee camps.

With Mission Congo, filmmakers David Turner and Lara Zizic conduct a deep investigation based on years of research into what Operation Blessing actually accomplished. They interview aid workers, eyewitnesses and even the pilots of Robertson’s airplanes who describe a different mission: diamonds. With the help of a brutal dictator and ex- Navy SEALS, Robertson was diverting his planes away from refugee camps to a different part of the Congo to extract precious gems. If the devil is in the details, here the details are jaw-dropping as we confront the disconnect between what Robertson promised and what others experienced.

The filmmakers draw strongly upon the reporting of Bill Sizemore, a journalist for The Virginian-Pilot. His dogged perseverance reminds us of the valuable role played by local newspapers at a time when they’re rapidly disappearing. The film raises larger questions over the billions of dollars raised by American religious institutions that go untaxed and unregulated. Robertson’s organization alone earns annual revenues in the hundreds of millions. If this story can bring about greater accountability, that would truly be a blessing.