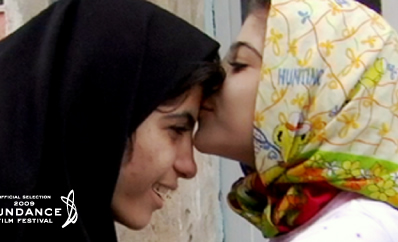 Filmmakers Hamid Rahmanian and Melissa Hibbard have been regular visitors to STF screenings and bar gatherings. Now they bring their latest documentary THE GLASS HOUSE, shot for nearly a year in Iran, fresh from its premieres at IDFA and Sundance film festivals.

Here’s the description from the Sundance catalogue:

THE GLASS HOUSE skillfully examines the mostly hidden lives of young women, teetering on the fringes of Iranian society in modern Tehran. Marginalized by their families, these women have found a saving grace in a day center formed by an Iranian expatriate. Marjaneh Halati opened the center to give downtrodden young women a voice, thus empowering them with the life skills they need to succeed on their own. Many of these teens previously spent time in a jail, hospital, or state home because they had no other options. Sussan is 20 years old and suffers from memory loss and a stutter as a result of a blow to the head either from her sigheh (temporary husband) or her abusive brother. Mitra is learning how to avoid confrontation with her father, who takes out his frustration on his 16-year-old daughter. Nazila, 19, finds an outlet for her anguish by recording as a rap singer, which is forbidden by law. The young women see Marjaneh as both a mother figure and a mentor and cherish her frequent visits from London. In superb cinema v&”233;rit&”233; style spanning 18 months, THE GLASS HOUSE deftly portrays a spirit of hopefulness. These former victims are given the chance to express themselves and transform their difficult circumstances into new beginnings.

THE GLASS HOUSE at STF