Originally titled “City Made of Snow”, director Billy Corben’s COCAINE COWBOYS makes use of archival television reports chronicling the bloodshed and mayhem between rival Columbian and Cuban cocaine distribution cartels on the streets of Miami in the early 1980s. With its darkly humorous intercutting of tourist TV spots and grisly file footage, the film plots a methodical time line of illicit activity in the Miami region, beginning with the shift from Marijuana importing to the more lucrative cocaine trade.

Cocaine trafficker John Roberts, professional pilot Mickey Munday and Columbian enforcer Jorge “Rivi” Ayala tell the tales of their roles in the cocaine industry from three distinct standpoints. Roberts as the New Yorker relocating to Miami for a new start and on the run from the mob, Munday as local boy and technical brains behind the operation and Ayala as hired killer for the head of one of the fiercest Columbian cartels in Miami.

To counter these three major personalities, several members of law enforcement and local government tell a similar tale of the transformation of a once-sleepy retirement haven to the wide open criminal haven that eventually gained notoriety as “the most dangerous place on earth.” Adding a 1980’s revival soundtrack supplied by Jan Hammer—composer of the original Miami Vice theme—the place and purpose of the era is successfully recreated stylistically.

With the South Florida Federal Reserve bank running out of space to store excess cash and high-rise condominiums being built with the illicit proceeds of the drugs trade, dozens of police were tried for corruption, as well as for serving as security for the largest operations, Roberts recalls in the film. But with so much cash coming into the city, eventually one faction would began to fight the others in order to command more and more of the profits. Once the conflict started, it erupted on a scale never seen before in terms of the speed and number of attacks and reprisals.

As each of the principles tell their story, the common thread of an out of control kingpin emerges. This kingpin was Griselda Blanco, or “The Godmother,” who tied together the Columbian narco-cartels, their Cuban rivals and the American pilots and traffickers who were indirect victims of her over-the-top bloodlust.

Suspected of masterminding over 200 murders in Miami-Dade County alone, the Godmother’s orders to kill women and the children of rivals for slights real or perceived, along with her use of automatic weapons and paramilitary equipment gave rise to the term “Cocaine Cowboys.” These killings and other acts of terror in broad daylight on the streets of Miami eventually drew the attention of President Ronald Reagan, who responded with an influx of federal law enforcement to the streets of Miami.

Corben described his techniques for interviewing difficult subjects: “You can always find a lawyer or a reporter or a cop that will give you an interview, but it’s a little harder and a little more work to find a convicted felon or (in the case of Ayala) someone serving three life sentences to open up to you and tell you about murders they committed.”

Corben humorously emphasized the strategy of playing deaf, dumb or slightly mixing up details to draw a subject out of their shell. “There’s nothing people like more than to set you straight,” he said. By asking to clarify details, a full accounting of the events can be obtained and often times a more fully realized version of the story is captured. 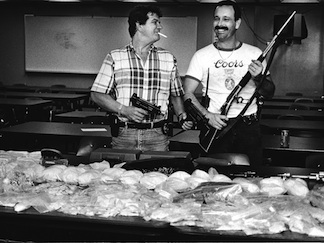