Stranger Than Fiction co-presented the film Cinema Komunisto at the 2011 Tribeca Film Festival. 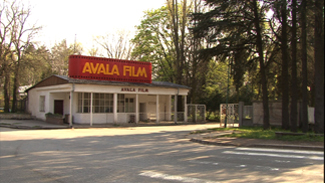 Viewers of Mila Turajlic’s film Cinema Komunisto might be surprised to learn that Yugoslavia’s state-run Avala Film Studios was not dedicated solely to enlarging the cult of personality surrounding Joseph Broz Tito, although it certainly did not shrink from that task. Relying on copious amounts of research and a trove of archival material, Truajlic’s film shows us Comrade Tito the cinephile—one who watched a film almost every day, and transformed his Yugoslavia into a prolific locus of filmmaking, for both artistic and propagandistic purposes. The heart of the film lies in the scenes bearing Tito’s personal projectionist, Leka Konstantinovic. In a powerful moment, Konstantinovic is shown arriving at Tito’s old estate in Belgrade for the first time in decades, where he ceremoniously hands over his key to the property to its current caretaker, who receives the gift with relative indifference. From the front, the house, though lacking a door, appears to be relatively intact. It’s only when Konstantinovic goes inside that he, and the viewer, discover that the projected reality of the edifice’s facade masks a hollowed out shell of little substance. Following the screening, Turajlic held a Q&A with the audience. Click “Read more” below.

Question: Could you talk about what inspired you to make this film?

Mila Turajlic: I initially was going to make a very small film about film studios. I went there for the first time in 1999 during the NATO bombing and it was kind of an eerie time in Belgrade generally. I had been to film school and no one had ever told us about them, that they were still there in this hill above Belgrade, that they were still employed there, that all of the costumes, props and sets were there, and they hadn’t made a film in 20 years. I was so inspired by the place that I just wanted to document it before it disappears. The film studios are still government property, and they’re going to be sold very soon. In fact, two weeks ago there was a press conference where the people at Avala pleaded with the government not to sell them—the real estate is very valuable. There was no answer from the government. We’ve actually started a petition, we’re going to try to preserve it before they throw everything away. There’s absolutely no awareness in Serbia that there’s something worth preserving as our cultural history. When I started looking for archives of the studios I began to realize that you could actually tell the whole story of Yugoslavia playing with this metaphor of a fictional country, of living in an illusion. That’s when I realized it was a good way to help people understand how the country came to be and how it collapsed in the end.

Q: I was surprised by how many funny, oddball moments there were. Did that surprise you?

Turajlic: There were several surprises when I was making it. In Yugoslavia, everybody knows Tito is a film lover. But it took me one year to get access to his personal archives, when I went in there and discovered that he had copies of scripts and that he had written notes on them. And he had received telegrams from actors. That’s when I realized that it was more than that he just loved film, this man directed the story of our country. Quite literally, he is the master illusionist behind the reality we were living in. That’s when I began to realize that he has to be an element of the story. I didn’t know about his projectionist. In fact, his projectionist had never given an interview, and it took me a long time to persuade him. Really taking him back to Tito’s residence I realized he’s going to be the heart of the film. The bizarreness and the comedy of the stuff, a lot of that came from looking through the archive and then in the editing room, because it was just so highly entertaining. “Nema Problema,” this is how they did things.

Q: Can you talk about how you found the films that you included?

Turajlic: Making this film took a little more than four years. There were two really hard elements to doing it. One was finding the archive. It’s very ironic because the main archive of Yugoslav newsreels—during the NATO bombing one of the bombs fell in the Yugoslav museum of history in the room where the index cards were kept. So they have the archive but they don’t know what they have. Some one would tell me a story and then I would figure out when it might have happened, and then I would go to them and say, could I just look at everything you have from that month or year. If they didn’t have it there, I’d ask them to go into the vault and look at the unused material from the newsreels. It took a long time—things would get flooded, disappear, then reappear because they were moving boxes around. They’d call me and say they just found the sound archive of Hitchcock.

It was a blessing that I had time because I could always go back. They said I was the biggest file in terms of someone who kept coming back—I’m kind of an archive junkie. Then I went to Croatia, then Slovenia, then Bosnia. Much of the archive is in a way orphaned material because no one really inherited the rights to it. It was made by something called the United Yugoslav Producers.
Then the other part was when we came up with the device of telling the history of Yugoslavia from feature films, because that’s the whole play of the film. How was the story told in fiction? But I didn’t realize that it was really hard to find old films. Of the 750 films made in Yugoslavia between 1945 and 1989, I managed to track down 320, and that was after two years of searching. There are some really intense film collectors in Serbia who have lists, but they won’t show you their lists until you show them yours. They won’t give you film unless you have something to swap that they don’t have.

I was driving all over the country trying to persuade these guys that I wasn’t a collector, I just needed the stuff for a film. But it worked out. Then I watched the 320 films, then as I was watching them I would write down a time code of things that I thought were interesting, that portrayed the reality of the country. I would enter them into a database, so in the end we had something like 1,300 clips. So we would say, let’s make a montage of funny deaths in partisan films, and we would type in “funny deaths” and get 40 or 50 clips to play with. That made it a little easier to go through the material.

Q: Can you tell us about how the film was received in Belgrade?

Turajlic: Tito’s a very contentious topic in Belgrade. Tito’s Yugoslavia is an undebated issue in Serbia today. We were kind of nervous about how this would play, and it ended up being more spectacular than anyone imagined. We had our premiere in the biggest theater in the Balkans, it was 3,5000 seats and it was full. Some of the characters were there—Tito’s projectionist didn’t live to see the film. In a way I blame myself because I didn’t want him to see it at home, I wanted to give him this premiere where he was onstage and could get the recognition for being such an amazing character. He died three months before the premiere, so he never got to see it.

But it opened a huge debate in the press, not just about Tito and Yugoslavia, but this whole question of, was Yugoslav cinema in the service of an illusion? The most spectacular thing that happened is that the next day we were contacted by multiplex theaters, and they said this has to go in cinemas. So we became the first documentary in Serbia to go in multiplex cinemas, which was completely unexpected. It proved that the time is ripe for a discussion of these things. Particularly in the 90s during Milosevic and then the 10 years that followed, Yugoslavia was kind of shoved under the carpet as something embarrassing in our past that we shouldn’t talk about, because how were we ever such idiots to be part of this story. Now, slowly they’ve started discussing again the nature of the country and what he had been for Yugoslavia.

Q: The Battle of Netva, do people still watch that film a lot? Is that why the blown-up bridge is such a big tourist attraction?

Turajlic: The film wasn’t really watched for about 20 years, and then two or three years ago it was shown on every national television station. In Croatia, it was the highest ratings for any show they’ve shown on Croatian television. There is a huge interest in this now, but for the last 20 years there wasn’t. There’s kind of been a rebirth in interest in the partisans and the Second World War and Tito.

Q: Did you encounter any difficulties in getting people to participate in the film?

Turajlic: To be honest, with one exception, every one of the characters said no when I first approached them. It was a long process to explain to them that I was not going to leave, and that I was going to keep coming back. I would look in the archive and when I would find something interesting I would go and show it to them. Slowly they began to realize I was really dedicated and they began to talk, it took a long time to get their participation. When we traveled around, people wanted to talk about Yugoslav cinema. Yugoslav films, particularly these big epics, schoolchildren are taken to see these films. Almost everyone knows someone who was an extra in these films. They were a part of the national heritage, so everyone has something they want to tell you. They really are part of our collective consciousness.