A TIME TO STIR 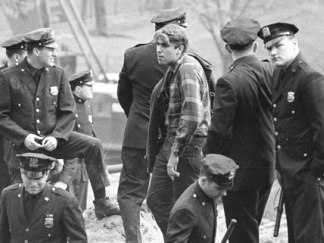 In April 1968, a protest held at Columbia University over race relations and the Vietnam War became a week-long student strike, occupying several buildings and ending with police violence. The event reverberated far and wide, signalling a dramatic shift between the “old left” embodied by the faculty and the “new left” of radicalized youth. In the epic documentary A Time to Stir, director Paul Cronin has undertaken a monumental oral history of this pivotal yet misunderstood event. He interviewed over one hundred and fifty of the participants from all sides, drawing upon rich archival footage to shed new light on the events.

For this special Mavericks presentation, A Time to Stir will be shown as a tightly structured work-in-progress, followed by a discussion with three key players: Mark Rudd, the campus chairman of Students for a Democratic Society (SDS) who later became a member of the Weather Underground; Bill Sales, a leader of the Student Afro-American Society (SAS), which helped guide the occupation; and Carolyn Eisenberg, who served on the student strike committee.

Sections of the film were screened this spring in New York City and Paris to commemorate the fortieth anniversary of the event. Audiences, which included many strike veterans, found the film revelatory, as it conveyed the intoxicating rebellion of the times along with sobering afterthoughts. At nearly four hours, this Mavericks screening of ATime to Stir will be the most complete version ever presented. The film earns its length with a richly layered narrative that takes us from the tense buildup to the protest itself, conveys the revolutionary and communal atmosphere that pervaded during the strike, and explores its brutal end.

Rudd became the most visible spokesperson of the strike, but as Cronin interviews a wide array of participants who were changed by the protest, the film makes clear that he was only one of many influential players. Today’s America faces another unpopular war and new political upheavals. This work offers a wealth of political lessons that will invigorate the new generation when it is their time to stir.