A WORLD NOT OURS 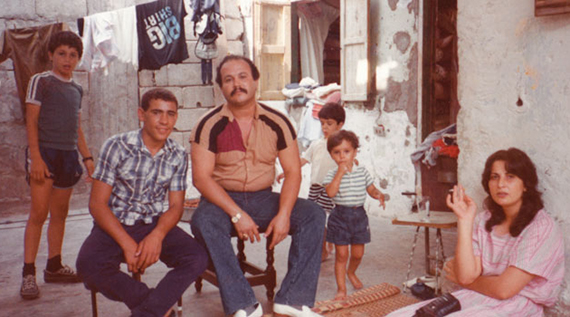 A World Not Ours is a dazzling act of first-person filmmaking that hits notes on a far-ranging emotional scale, from tears to laughter. Director Mahdi Fleifel makes us feel for his family, friends and home as strongly as if they were our own. His themes are universal, yet they are also rooted in a specific place that you’ve probably never seen in a movie before: the Palestinian refugee camp of Ain el-Helweh in Lebanon. The camp’s name translates as “Sweet Spring” — an ironic name for a place hastily built in 1948 and which now houses 70,000 refugees in an area of one square kilometre. Fleifel spent his formative years in the camp in the 1980s, before his family settled in Denmark. For years, he’s been returning and keeping a video diary. At the heart of the film is Fleifel’s relationship to his friend Abu Iyad. They share an obsession with World Cup soccer and Palestinian politics, but Fleifel has the ability to come and go, while Abu Iyad does not. That inequity makes their friendship extra precious, and also susceptible to tension.

Fleifel inherited a compulsion for videotaping from his father, and he draws upon a lively family archive. The film is peppered with allusions to Western influences, from Michael Jackson to Rambo to Neil Young, and scored with nostalgic music befitting a Woody Allen soundtrack. For Western viewers, those familiar touchstones — along with Fleifel’s witty narration in English — help us to project ourselves into a world that’s foreign in many other ways. As we eavesdrop on Fleifel’s conversations with the camp residents, we hear an unfiltered take on Palestinian grievances with their own political leaders, Lebanon and Israel. The six decades since Ain el-Helweh was built have been packed with tumultuous history, and Fleifel’s personal journey is an inviting way to process it. Maybe you’ve never heard of Ain el-Helweh before, but after this film you’ll never forget it.