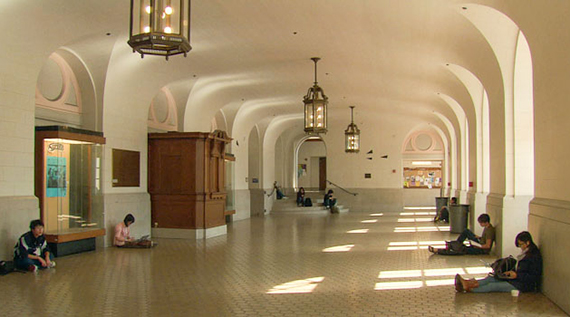 Direct cinema pioneer Frederick Wiseman takes an in-depth look at the preeminent American university during a fall semester that saw a vigorous debate taking place over tuition hikes, budget cuts, and the future of higher education in the United States.

Frederick Wiseman has dedicated the past four decades to documenting how people function inside of institutions. In recent films such asBoxing Gym and Crazy Horse, he focused on modest-sized enterprises. Now he turns to one of the most sprawling and complex organizations of his career: the pre-eminent University of California, Berkeley. Wiseman and cameraman John Davey embedded themselves at the school during the fall of 2010 while a vigorous debate was taking place over tuition hikes and budget cuts. The resulting four-hour film gives us unrestrained access inside classrooms, student protests, and administrative meetings, as newcomers and old-timers alike hash out the future of higher education in the United States.

Berkeley has a storied reputation as a battleground for free speech. (See Mark Kitchell’s documentary Berkeley in the Sixties for perspective on an era that still looms large.) Today, the school attracts highprofile professors such as Robert Reich (the former US Secretary of Labor, who Wiseman captures lecturing on “self-evaluation”), and pursues cutting-edge research that earns vital revenue. But cutbacks are felt throughout the school, down to a landscaping staff with only one person left to mow the lawns.

Wiseman practices his craft with great subtlety. As viewers, we’re dropped into situations and left to figure out what’s going on and how we feel about it. One recurring figure is the white-haired university chancellor, Robert J. Birgeneau (who previously served as University of Toronto president). In one memorable scene, Birgeneau contrasts his own student days confronting authority to the demands of this new generation. It’s a classic Wiseman moment: candid and open to interpretation.