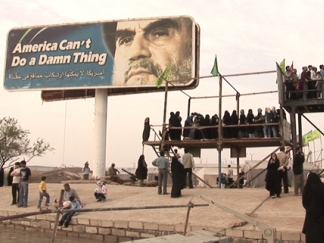 About the director:
Mehran Tamadon was born in Iran and moved to France at the age of twelve. He attended L’&”201;cole National Sup&”233;rieure d’Architecture de Paris la Villette and participated in the creation of the review L’Arrosoir in 1999. He directed the short documentary Behest Zahra, Mothers of Martyrs in 2004. Bassidji (09) is his first feature documentary.