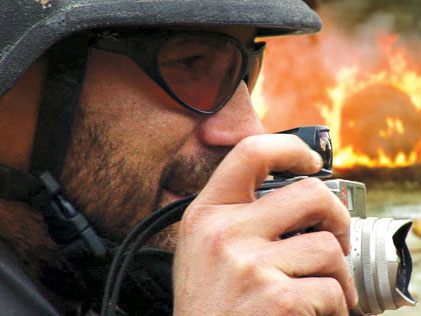 Though war photographers have often been captured onscreen, no film has followed a career trajectory as closely as Blood Trail. Director Richard Parry has been intermittently checking in with photographer Robert King, from his start in Bosnia to his breakthrough work in Chechnya to his struggles embedding in Iraq. His portrayal of King’s personal and professional growth is reminiscent of Michael Apted’s Up series “~ only under fire.

When we first meet King as a naive twenty-four-year-old covering Bosnia in 1993, his prospects do not look promising. You would not bet that he would live to see thirty or even twenty-five. He is full of aspirations to win a Pulitzer, but has a lot to learn about how to take a picture, how to sell a picture and how to avoid snipers. King’s southern upbringing in Tennessee sets him apart from the other members of the press corps, who tend to congregate in media capitals like London or Manhattan. We see him develop a camaraderie with Vaughan Smith, a more seasoned British journalist (and one of this film’s producers) who teases the newcomer over his lack of knowledge.

Blood Trail dispels the romance and sanctimony that often clings to depictions of war journalism. “Why would you risk your life to take pictures that no one wants to see?” asks a woman in the film. War photographers are driven to bear witness, but other motivations are part of the mix “~ like overcoming personal demons or seeking a perverse form of glory “~ and Blood Trail candidly explores these.

King has still not achieved his Pulitzer, but he has earned the respect of his peers, and we see them sharing war stories in London’s Frontline Club (which was founded by Smith). As a freelancer, King lacks some of the comfort that comes from working with photo agencies like Magnum or VII, but this makes him even more representative of the largely anonymous press corps who put themselves in danger to bring us the news. While visiting some of the most dangerous places on earth, Blood Trail also poignantly observes what it means to be rescued.

About the director:
Richard Parry started making Super 8 shorts at age thirteen. In 1992, he shot and directed his first documentary, and in 2001 he released his first feature-length film, South West Nine. Since then he has shot documentaries in Iraq and Afghanistan for CNN, Discovery and A&E. Begun in 1993, Blood Trail (08) is his latest work.