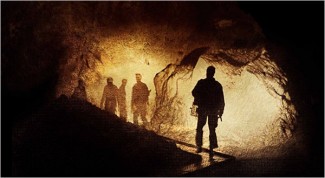 Werner Herzog is a wizard at conjuring unforgettable visions, from the ship dragged over the mountain in Fitzcarraldo to the Antarctic landscape in Encounters at the End of the World. Now he brings us the earliest known visions of mankind: the Chauvet-Pont-d’Arc cave art of southern France, created more than thirty thousand years ago. By comparison, the famous cave art of Lascaux is roughly half as old. Since Chauvet’s discovery in 1994, access has been extremely restricted due to concerns that overexposure, even to human breath, could damage the priceless drawings. Only a small number of researchers have ever seen the art in person.

Herzog gained extraordinary permission to film the caves using lights that emit no heat. But Herzog being Herzog, this is no simple act of documentation. He initially resisted shooting in 3D, then embraced the process, and now it’s hard to imagine the film any other way. Just as Lascaux left Picasso in awe, the works at Chauvet are breathtaking in their artistry. The 3D format proves essential in communicating the contoured surfaces on which the charcoal figures are drawn. Beyond the walls, Herzog uses 3D to render the cave’s stalagmites like a crystal cathedral and to capture stunning aerial shots of the nearby Pont-d’Arc natural bridge. His probing questions for the cave specialists also plunge deep; for instance: “What constitutes humanness?”

In an essay titled “Why I Hate 3-D (And You Should Too),” the critic Roger Ebert wrote that he could only be reconciled to the format by a filmmaker like Herzog. Cave of Forgotten Dreams promises to both open and blow the minds of similar skeptics.

Cave of Forgotten Dreams was triggered by an article in The New Yorker by Judith Thurman, who tried to gain access to the Chauvet caves and finally wrote her piece based on photos and interviews. I recently joined Thurman at a screening for her first experience of Chauvet in 3D. Her response when the lights came up: “It’s a miracle.”

About the director:
Werner Herzog was born in Munich and grew up removed from technology in a remote Bavarian village. He worked as a welder to fund production of his first film at age nineteen and has since directed more than fifty features. His films have won numerous awards, including the special grand jury prize at the Cannes Film Festival for The Enigma of Kaspar Hauser (74) and best director at the Cannes Film Festival for Fitzcarraldo (82). His other films include: Aguirre, The Wrath of God (72), Nosferatu (78), Little Dieter Needs to Fly (97), Grizzly Man (05), Rescue Dawn (06), Bad Lieutenant: Port of Call New Orleans (09) and Cave of Forgotten Dreams (10).