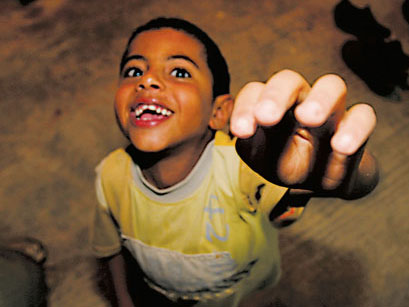 After such a long conflict between Israel and Palestine, it takes an extraordinary story to jolt us out of accepting the status quo. The Heart of Jenin tells such a story. In November 2005, Ahmed Khatib, a twelve-year-old Palestinian boy, was playing with a plastic gun in the Jenin refugee camp on the West Bank when an Israeli soldier, mistaking the toy for a weapon, shot and killed him. Despite his grief, the boy’s father Ismael consented to donate his son’s organs to several Israeli children. Thanks to this act of humanity, four of those children, each from a different part of Israeli society, are alive today.

The Heart of Jenin explores the legacy of Ismael’s decision during the two years following his son’s death. We meet three of the young recipients of Ahmed’s organs: Samah, a Druze girl in northern Israel, near the border of Lebanon; Mohammad, a Bedouin boy in the Negev desert; and Menuha, an Orthodox Jewish girl in Jerusalem. At the centre of the story is the compelling figure of Ismael Khatib. Having lived his whole life under occupation, he joined the resistance during the first Intifada and spent time in an Israeli prison. He later gave up fighting to focus on his family, but has lost two businesses to the conflict. The existing Israeli checkpoints make it difficult to visit his cousin, who lives only ten minutes away.

Directors Leon Geller and Marcus Vetter bring diverse backgrounds to the project. Geller lives in Israel, while Vetter is based in Germany, and has an unusual background that he explored in the autobiographical documentary My Father the Turk. With great sensitivity, they explore the complexities and the sorrow that persist on each side of the wall dividing Israel and the West Bank. In spite of all these troubles and the death of his son, Ismael maintains a willingness to seek peace through his own means. His journey is a triumph of the heart.

About the director:
Leon Geller was born in New Jersey and moved to Israel, where he studied film at Tel-Aviv University. His graduate short film earned him an Academy Award~~ nomination. He has directed various short documentaries for Israeli television, as well as the short film Roads (07). Heart of Jenin (08, co-director) is his debut feature documentary.

Marcus VetterMarcus Vetter was born in Stutt-gart, and studied economics and media theory and practice at the University of T~~bingen. He works as a television editor, producer and director, and his filmography includes the feature documentaries Wargames (02), My Father the Turk (06, co-director), Die Unterzerbrechlichen (06, co-director), Traders’ Dreams “~ the eBay World (07, co-director) and The Heart of Jenin (08, co-director).