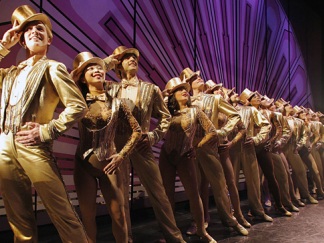 Broadway has produced many legendary productions, but A Chorus Line and the story behind it remain special. Every Little Step captures the magic of the show by following the process of casting the 2006 stage revival. The concept is self-referential, given that the very plot of A Chorus Line is about casting a musical, but the filmmakers add another layer by examining how the original show was born when Michael Bennett recorded a group of dancers speaking in confessional mode. Fans of the show may get goosebumps hearing those audio tapes, while newcomers will discover what made Bennett (in the words of the finale song) “one singular sensation/every little step he takes.”

This is the third documentary directors James D. Stern and Adam Del Deo have premiered at the Festival. Stern has built a prolific career producing film and Broadway shows, including The Producers and Hairspray. His participation afforded the crew extraordinary access behind the scenes and, for anyone who loves theater, Every Little Step is cause for hip-swaying, high-kicking celebration.

In auditions, we see performers giving everything they’ve got for songs like “I Can Do That” and “At the Ballet.” We meet the original performers Donna McKechnie (who performed “The Music and the Mirror” ) and Baayork Lee (whose personality and short stature inspired the character Connie) along with the aspiring dancers who hope to revive those roles. Encountering so many talented hopefuls, it is mesmerizing to watch their different interpretations of each character. As part of the dialogue between past and present, composer Marvin Hamlisch reveals how the song known as “Tits and Ass” was almost cut in 1975, while thirty years later new singers out-vamp each other to make it their own.

But who will get the parts? The directors deftly follow the process to the end “~ the heartbreak of being cut, the exhilaration of being chosen. The result is one thrilling combination, every move this film makes.

About the directors:
James D. Stern was born in Chicago. His producing credits include the theatrical productions Stomp, Hairspray and The Producers and the feature films Harold & Kumar Go to White Castle (04), Proof (05) and I’m Not There (07). He made his directorial debut with All the Rage (99), and has since co-produced and co-directed The Year of the Yao (04), “~So Goes the Nation (06) and Every Little Step (08) with Adam Del Deo.

Adam Del DeoAdam Del Deo was born in Portland. He has produced feature films including All the Rage (99), Digging to China (98) and Solstice (08). He co-directed and co-produced the documentaries The Year of the Yao (04) and “~So Goes the Nation (06) and Every Little Step (08) with James D. Stern.