FROM THE SKY DOWN 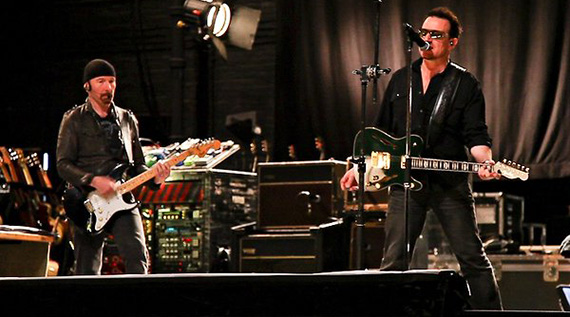 There are precious few acts in the music business that can match the integrity, breadth of appeal, and rugged durability of U2. Yet with the eighties drawing to a close and their epoch-making Joshua Tree album behind them, the Irish quartet had reached such dizzying heights of fame — and, some argued, arrogance — that it seemed the only thing left for them to do was fall apart like so many great rock ‘n’ roll bands before them. Instead, they retreated to a German studio, revived their sense of humour, mischief and musical adventure, and ardently went about reinventing themselves. The result was 1991’s Achtung Baby, and the process of creating that astounding album is the subject of Davis Guggenheim’s exhilarating documentary From the Sky Down.

Gaining intimate access to the band as they return to Berlin’s beautiful Hansa Studios to rehearse for their Glastonbury performance of Achtung Baby, Guggenheim finds Bono, The Edge, Adam Clayton and Larry Mullen, Jr. in peak form. The band has always been insistent on renovating their back catalogue for live performances. As they set about finding fresh ways to interpret songs like “The Fly,” “One” and “Even Better Than the Real Thing,” they also begin to reminisce about how those songs first came to fruition — and about the stew of personal struggles that informed them.

Bono has always been a witty, self-effacing and articulate raconteur, and his tales of coping with massive success and its inevi&”173;table backlash are enormously entertaining.

A handful of the best stories come not from the band, however, but from some of their most esteemed collaborators, such as Brian Eno and Canadian Daniel Lanois. The pro&”173;ducers provide fascinating descriptions of the strange, winding and often amusing journeys from inspiration to synthesis.

Drawing from a wealth of archival foot&”173;age that’s alternately dazzling and revealing, From the Sky Down deserves a place amid the upper echelon of rock documentaries. And just as there’s nothing like seeing U2 onstage to feel the maximum thrill of their pulsating anthems, this film needs to be experienced on the big screen to fully sur&”173;render to its rush.