GLASS: A PORTRAIT OF PHILIP IN 12 PARTS 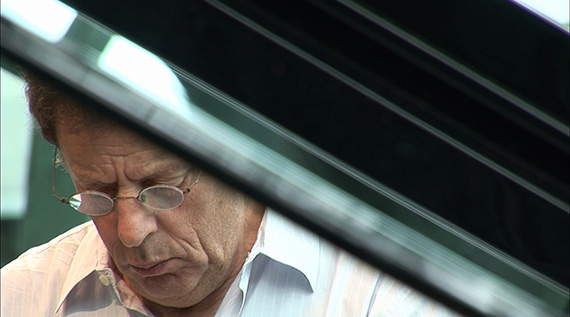 Philip Glass~s achievements in music “~ film scores, operas, symphonies “~ make him one of the most important composers of our era, crossing divides between elitist concert halls and popular venues. His minimalist compositions are so iconic that he has been featured as a character on The Simpsons.

Director Scott Hicks demonstrated his own knack for popularizing classical music in his 1996 film, Shine, about the pianist David Helfgott. In GLASS: a portrait of Philip in twelve parts, Hicks gains access to confidants and situations that the average documentarian would never obtain. The film traces an eventful year in Glass~s life, as he stages the opera Waiting for the Barbarians, writes his eighth symphony, scores several films, travels the world and maintains a family with his fourth wife, Holly.

Along with observing Glass in the present day, Hicks ventures into the past through incisive interviews. Glass~s siblings recall their brother~s formative years working in his father~s record store and the family~s expectation that he would pursue a non-musical career. His first wife, JoAnne Akalaitis, describes the artistic ferment of New York in the sixties when Glass founded his own ensemble and supported himself as a plumber. Glass~s ambition, described by his old friend, artist Chuck Close, was to be so distinctive that no one should hear his music and think of another composer.

The film artfully explores the many facets of Glass~s life, blending them into a seamless whole. Glass draws upon the East and the West, the spiritual and the earthy, the serious and the playful. On one day, he reminisces with Ravi Shankar; on another, he talks shop with Woody Allen (whose film Cassandra~s Dream, scored by Glass, is a Gala screening at this year~s Festival). Glass~s tremendous contribution to film is illuminated through interviews with Errol Morris (The Thin Blue Line), Godfrey Reggio (Koyaanisqatsi) and Martin Scorsese (Kundun).

What distinguishes this film from other documentary portraits is the delicate intimacy achieved by Hicks (who operates the camera himself). Some of the most memorable scenes show Glass vacationing with his family at their summer home in Nova Scotia. Holly, almost thirty years his junior, speaks candidly about the joys and frustrations of living with someone so driven by music. Throughout the ups and downs, Glass maintains a zen approach: “You don~t like my music? Listen to something else.”

About the director: Scott Hicks was born in Uganda and studied cinema at Flinders University in Adelaide, Australia. His fiction features and documentaries include Freedom (81), Call Me Mr. Brown (96), the Peabody Award-winning The Great Wall of Iron (89), Shine (96), which won the People~s Choice Award at the Festival in 1996 and was nominated for seven Academy Awards~~, Snow Falling on Cedars (99), Hearts in Atlantis (01), No Reservations (07) and GLASS: a portrait of Philip in twelve parts (07).