IN CONVERSATION WITH APICHATPONG WEERASETHAKUL 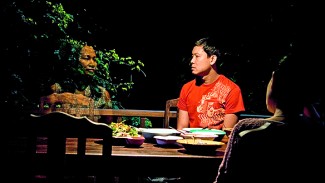 Apichatpong Weerasethakul is considered a cinematic treasure by art house aficionados. To get over his intimidating Thai name, he encourages westerners to call him Joe. At the age of thirty-nine, he straddles the worlds of film and art and is the focus of a monograph edited by TIFF Cinematheque director James Quandt. Yet exposure to Weerasethakul’s work has been limited. This year his reputation spread further when he won the prestigious Palme d’Or at the Cannes Film Festival for Uncle Boonmee Who Can Recall his Past Lives. Playing separately at the Festival in the Masters programme (see page 103), this playful and innovative film offers the chance to open the door to new audiences. In this Mavericks session, film critic Dennis Lim will interview Weerasethakul onstage and take us through his career, illustrated with film clips.

Born in Bangkok, Weerasethakul trained as an architect in Thailand before earning an M.F.A. in filmmaking at the School of the Art Institute of Chicago. “I believe I was lucky to be in this place,” he told an interviewer. “I was encouraged to experiment with the idea that nothing was wrong. That’s the opposite from Thailand’s education system.” Returning to his native country, he directed a series of feature works that stood out for their bold experiments with structure, including Blissfully Yours, Tropical Malady and Syndromes and a Century.

With regards to Uncle Boonmee, he told the New York Times, “I was conscious about accessibility only because I wanted this to be like a children’s film, or a children’s book, to retain that feeling of innocence.” The approach was enthusiastically embraced by critics. Describing the film’s plot in The Guardian, Peter Bradsaw wrote, “Baldly recounted, these events sound ridiculous, and yet it all has something sublime and visionary about it, with a spiritual quality I can’t remember seeing in any film recently.” Whether you’re a Weerasethakul newcomer or a longtime follower, you shouldn’t pass up this chance to encounter his distinct sensibility in person.

About the director:
Apichatpong Weerasethakul was born in Bangkok. He completed a degree in architecture at Khon Kaen University and an M.F.A. in filmmaking at the School of the Art Institute of Chicago. Since the early nineties, he has been making short films and videos that merge fiction and documentary. His films include the groundbreaking Mysterious Object at Noon (00), The Adventures of Iron Pussy (03) and Syndromes and a Century (06). His films have won multiple awards at the Cannes Film Festival, including the Un Certain Regard award for Blissfully Yours (02), the Jury Prize for Tropical Malady (04) and the Palme d’Or for Uncle Boonmee Who Can Recall His Past Lives (10).