IN CONVERSATION WITH BRUCE SPRINGSTEEN 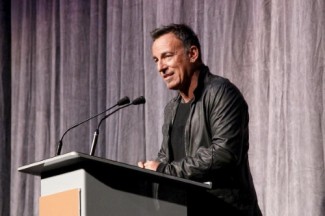 Bruce Springsteen visits the Festival for the world premiere of The Promise: The Making of Darkness on the Edge of Town &”8211; playing separately as a Gala. The documentary explores the creative process of his pivotal 1978 album, where his focus shifts from youth to adulthood. Interviewed in the film, Springsteen often reaches for cinematic comparisons to describe his songs. That sparked the idea to invite him for a longer conversation about the interplay between music and film. Springsteen graciously accepted our invitation to be interviewed on stage by the actor Ed Norton for this Mavericks dialogue.

Where the conversation will go is anyone’s guess. But it prompts us to consider how much Springsteen’s music and American filmmaking have exchanged. From Springsteen’s descriptive lyrics, we can conjure scenes in our head of “Rosalita (Come Out Tonight)” or “Hungry Heart” or “Atlantic City.” Sean Penn has credited the song “Highway Patrolman” as inspiration for his first film The Indian Runner. Springsteen has contributed unforgettable title songs to films such as The Wrestler, Dead Man Walking, and Philadelphia,for which he won an Academy Award&”174; for best original song. Springsteen even made a cameo appearance in the movie High Fidelity, offering love advice to Jon Cusack’s character in a dream sequence.

Inducted into the Rock and Roll Hall of Fame, Springsteen could easily rest on his laurels. Yet in recent years, he has shown no signs of slowing down; in fact, quite the opposite. His song “The Rising” became a touchstone to commemorate September 11, 2001 and he memorably performed “Working on a Dream” for Barack Obama’s campaign. When Springsteen was honored last year at the Kennedy Center, his fellow New Jersey native Jon Stewart said in tribute, “I didn’t understand his music for a long time, until I began to yearn. Until I began to question the things that I was making and doing in my own life. Until I realized that it wasn’t just about the joyful parade on stage and the theatrics. It was about stories of lives that could be changed.”