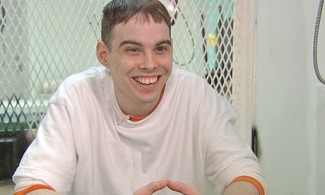 Crime stories can often fall into a predictable pattern of whodunit, but trust Werner Herzog to bring his own unique approach to the genre. He focuses on a triple homicide case in Conroe, Texas, that occurred ten years ago. Epitomizing the word “senseless,” the apparent motive behind the murders was to steal a car for a joyride. The convicted killers were two teenagers, Michael Perry and Jason Burkett, who had a history of substance abuse and violent bravado. They deny their guilt (each blaming the other), but the verdict was based on strong evidence that Herzog doesn’t challenge. Instead, he probes the legacy of the crime and the psyches of the people involved, unveiling layers of humanity, both cold and compassionate.

Herzog, who strongly opposes capital punishment, came to this story after interviewing several people on death row. Among them was 28-year-old Perry, scheduled to die eight days after talking to Herzog. “When I talk to you, it does not necessarily mean that I have to like you,” Herzog says to Perry, “but&”8230; I think human beings should not be executed as simply as that.” Burkett, in contrast, was given a comparatively lenient sentence of life imprisonment, prompted by an emotional plea from his father (who is also incarcerated). After delving deeper, Herzog chose to concentrate on this particular case.

In a departure from films like Cave of Forgotten Dreams or Grizzly Man, Herzog refrains from his distinctive and familiar voice-over commentary, but his presence is felt through his questions. In addition to interviewing Perry and Burkett, he talks to their relatives, the victims’ families, law enforcement officials and others. Exploring an American gothic landscape, he takes us from luxury homes to impoverished trailers to prison cells. Herzog’s inquiries yield surprising moments that speak to a variety of human tendencies, including regret, redemption and irrational behaviour. As he’s done so often before, Herzog turns ominous territory into an enlightening trip.

About the director:
Werner Herzog was born in Munich and raised in the remote Bavarian village of Sachrang. He worked as a welder to fund his first film at age nineteen, and has since directed over fifty features. His films have won numerous awards, including the Grand Jury Prize at the Cannes Film Festival for The Enigma of Kaspar Hauser (74) and best director at the Cannes Film Festival for Fitzcarraldo (82). His other films include Aguirre, the Wrath of God (72), The Enigma of Kaspar Hauser (74), Stroszek (77), Lessons of Darkness (92), Grizzly Man (05), Bad Lieutenant: Port of Call New Orleans (09), Cave of Forgotten Dreams (10) and Into the Abyss (11).