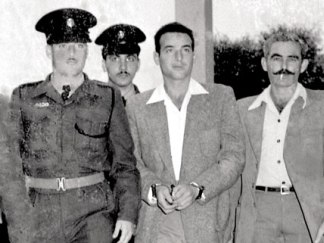 How much does one negotiate with the enemy? In Israel, the debate surrounding this question can provoke fury to the point of assassination. Such was the case of Dr. Israel Kasztner, who many considered a hero for the role he played in rescuing over sixteen hundred Hungarian Jews from death in 1944. At that stage of the war, the Nazis had looted everything they could, and desperately needed cash and supplies. Kasztner, a Hungarian Jew with connections abroad, negotiated directly with Adolf Eichmann to purchase Jewish lives with smuggled funds. As a result, thousands were transported to Switzerland on what became known as “Kasztner’s train” “~ the highest number of Jews saved during the war by a fellow Jew. Yet later this extraordinary act was cast as a betrayal. After moving to Israel, many of Kasztner’s new countrymen accused him of collaborating with the enemy. He fought a vicious libel battle in a trial that portrayed him as “the man who sold his soul to the devil,” and was ultimately assassinated in Tel Aviv in 1957.

Director Gaylen Ross examines this story as it plays out today, when passions can still run high among those touched by Kasztner’s life. We see his family in Israel, including daughter Zsuzsi and granddaughter Merav, actively trying to restore his legacy. We also meet his political opponents: the son of the lawyer who humiliated Kasztner in court and the journalist who turned the trial into a sensation. In a stunning revelation, Ze’ev Eckstein, Kasztner’s assassin, speaks out for the first time. He reveals details of the midnight murder on a street in Tel Aviv, disclosing the shadowy underworld of Israel’s right-wing extremists.

Killing Kasztner peels back layers of history, deepening our understanding of World War II, Israel’s fledgling years and the contemporary gatekeepers of memory. In one poignant scene, survivors of “Kasztner’s train” confront the head of Yad Vashem to ask why the Israeli Holocaust museum has overlooked the man who saved them. In the face of such neglect, this film helps bring Kasztner’s memory back to life.

About the director:
Gaylen Ross was born in Indianapolis. An actor, writer, producer and director, she graduated with a B.A. in literature from The New School for Social Research in New York. Her documentaries include Dealers Among Dealers (95), To Russia for Love (99), the award-winning Listen to Her Heart: The Life and Music of Laurie Beechman (03) and Killing Kasztner (08).