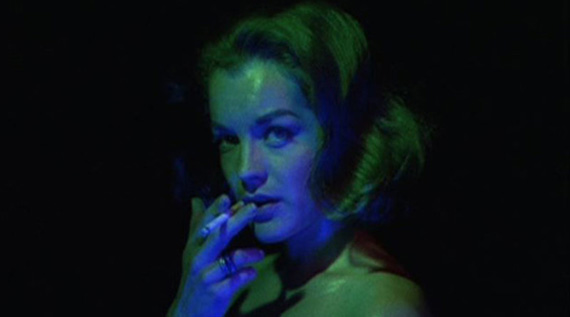 The French director Henri-Georges Clouzot is renowned for suspenseful classics such as Le Salaire de la peur (in English, The Wages of Fear) and Diabolique. Now this incredible documentary gives us new appreciation for his creativity by bringing to light footage from his unfinished film L’Enfer. In 1964, Clouzot set out to direct the story of a husband, played by Serge Reggiani, who suffers bouts of paranoid jealousy over his new bride, played by the twenty-six-year-old Romy Schneider. Hollywood investors promised Clouzot an unlimited budget, which he spent experimenting with months of camera tests. As an art lover &”8211; his previous films included Le Myst&”232;re Picasso &”8211; Clouzot took inspiration from the kinetic and kaleidoscopic visuals that were emerging in galleries. L’Enfer’simages were rumoured to be incredible, but the film was shut down three weeks into production and the footage went unseen for over forty years.

Enter Serge Bromberg, a renowned figure in the world of film restoration. His Paris-based company Lobster Films has played a vital role in restoring works by directors such as George M&”233;li&”232;s, Jean Vigo and Marcel Carn&”233;. Bromberg learned of the footage for L’Enfer from a chance encounter in an elevator with Clouzot’s widow. For this documentary, he and co-director Ruxandra Medrea interviewed members of the original L’Enfer crew to unearth the film’s behind-the-scenes story and contextualize Clouzot’s lost work.

Watching this film is like paging through a great artist’s sketchbook. For all the “making of” movies in the world, few take us as deeply into the creative process as this one. We watch as camera tests evolve into fully realized scenes. Clouzot sought to evoke a powerful eroticism through images as simple as that of Schneider puffing a cigarette (and just wait till you see how she handles a Slinky toy). Clouzot also wanted to visually convey the descent into madness. Without today’s digital effects, he relied on the old-fashioned movie tools of cinematography, costuming and makeup. But the stress of his over-reaching ambition brought the production to an end. Thanks to this documentary, we now have a chance to see what we’ve been missing all these years.

About the directors:
Serge Bromberg was made a Chevalier of the French Order of Arts and Letters in 2002. He worked extensively in film restoration and as an executive producer for television before making his first feature documentary, L’Enfer de Henri-Georges Clouzot (09).

Ruxandra MedreaRuxandra Medrea was born in Romania and began her career as an intellectual property lawyer. L’Enfer de Henri-Georges Clouzot (09) is her first feature documentary.