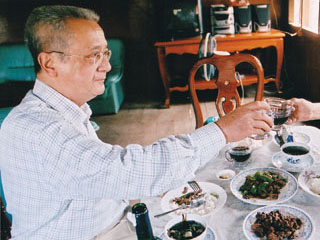 Jacques Verg~~s is the kind of lawyer that people love to hate. Over several decades, he~s made a career of defending some of the most despised figures of our time “~ from anti-colonial bombers in Algeria, to left-wing extremists like Carlos the Jackal, to right-wing dictators like Slobodan Milo~~evi~~. His clients~ contradictory agendas have made Verg~~s~s own politics hard to pin down. At the height of his career, he disappeared for an eight-year period that no investigator has ever been able to account for. Then he reappeared “~ refusing to disclose where he had been “~ and continued where he left off, taking on even more controversial clients.

Such a morally ambiguous character might put off most directors. But Barbet Schroeder has always been drawn to this type of man. His fiction film Reversal of Fortune adapted the true story of another lawyer defending a dubious client, and his documentaries such as G~~n~~ral Idi Amin Dada: Autoportrait and The Charles Bukowski Tapes are populated with dark personalities.

In filming L~Avocat de la terreur, Schroeder gained access to several former clients of Verg~~s, who have never before given such candid interviews on camera. He takes us into their shadow world where one country~s terrorist is another~s freedom fighter. Verg~~s first came to prominence during Algeria~s struggle for independence in the fifties. He defended Djamila Bouhired, the woman who planted the bomb at the Milk Bar, an incident famously dramatized in the film The Battle of Algiers. Verg~~s fell in love with Bouhired while she was in jail; the couple later married and had two children. Schroeder frames Verg~~s~s subsequent career as a continual attempt to recapture this heroic era of romance and anti-colonial struggle, whatever the price. One of his most infamous clients was Klaus Barbie, the Nazi whose story is told in another of this year~s Real to Reel films, My Enemy~s Enemy.

Schroeder has said he approaches his fiction films like documentaries and his documentaries like fiction. L~Avocat de la terreur plays out like a gripping detective story where the mysteries are manifold and the characters larger than life. But the stakes feel even more dramatic for being real.