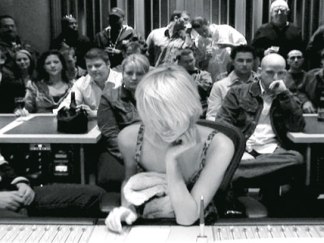 Polls show that in certain demographics, a higher percentage of people identify the name “Paris” with the woman than with the city. So let’s refer to her on a first-name basis. Not a day goes by that Paris isn’t mentioned in a magazine, TV show or gossip column. Presidential candidate John McCain invoked her as an icon of shallow celebrity and she retorted with a witty spoof ad. But despite all of this attention, what does the public really know about her? Director Adria Petty gained close access to Paris during a tumultuous year, and her film reveals different sides of the heiress than we are used to seeing. Petty has a penchant for creating fantastic worlds out of special effects, like the magical funhouse she directed in the music video for Regina Spektor’s song “Us.” In the case of Paris, no special effects are required. Her world is a real-life fantasy.

We follow Paris jet-setting through international capitals “~ where everyone wants a piece of her. Her “Paris the Heiress” persona was concocted for the reality TV show The Simple Life, but at some point fiction and reality began to blur.

We see Paris starting to grow up and taking more control. Petty inspires her to talk about her life in a way that no other journalist has: the rebellious streak that propelled her into a modelling career, the shock of having her sex life exposed to the world, and the pressures of living under constant media distortions. Paris is by turns seductive and vulnerable, in charge and out of control. As she sits at a table with her brand managers, it is hard to tell whether they work for her or vice versa.

Petty gets revealing interviews with Paris’s parents Rick and Kathy Hilton, sister Nicky and other family members. Donald Trump, Camille Paglia, Michael Musto and others weigh in on her mystique. The film becomes a fascinating case study on the role of celebrity in our culture. Paris isn’t known for picking her film parts wisely, but her most interesting role turns out to be that of herself.

About the director:
Adria Petty was born in Los Angeles and studied film at New York University’s Tisch School of the Arts. She has directed commercials and music videos for artists like Regina Spektor and the Kings of Leon, and worked as a film columnist for Nylon magazine. Paris, Not France (08) is her debut feature documentary.