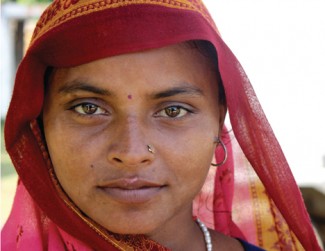 “If you’re shy, you’ll die.” This is just one of the catchy aphorisms uttered by the formidable Sampat Pal Devi, leader of the Gulabi Gang (a.k.a. the “Pink Gang”), the centre of this stirring film. Her base is northern India’s state of Uttar Pradesh, where entrenched tradition continues to condone child marriages, dowry deaths and abuse inflicted upon wives by husbands and in-laws. The Gulabi Gang seeks to help women from the lowest caste, known as dalits or “untouchables.” The female gang members assert their presence by wearing bright pink saris and make good on Sampat Pal’s assertion that: “there is no higher power than a woman.”

Director Kim Longinotto frequently chronicles crusading women around the world. She has a knack for putting herself in highly charged environments where dramas seem to occur on a daily basis. In Pink Saris, Longinotto collaborates with Amber Latif and Girjashanker Vohra to follow the Gulabi Gang at work. Distraught women come to Sampat Pal for help, believing their only other option is suicide. Sampat Pal courts controversy with her disdain for religion and custom. Combining the sensibilities of vigilante and opinionated auntie, she advises: “When a man does wrong, give him a beating.” Often attracting a crowd of gawkers, she settles problems in the streets, conducting personal arbitrations like the judge of a citizens’ court. Her empathy comes from her own hardships; she was married at age twelve and fought to establish her independence. Now her unorthodox lifestyle has her cohabiting with a man from a higher caste.

Sampat Pal draws strength from bold declarations, such as: “I am the messiah for women.” Yet Longinotto portrays a complex and flawed figure. We see Sampat Pal’s more vulnerable side, as she endures family pressures and struggles to support her growing circle of dependents. Still, Pink Saris reverberates with feelings of hope and empowerment against the odds. We should all be so fortunate to have a gang of pink saris on our side.

About the director:
Kim Longinotto was born in London, England. She studied camera and directing at England’s National Film School. She has won numerous awards, including the World Cinema Jury Prize in Documentary at the Sundance Film Festival for Rough Aunties (08), a Peabody Award for Sisters in Law (05) and the Outstanding Achievement Award for career accomplishment at this year’s Hot Docs film festival. Her other films include: Dream Girls (93), Divorce Iranian Style (98), Hold Me Tight, Let Me Go (07), and Pink Saris (10).