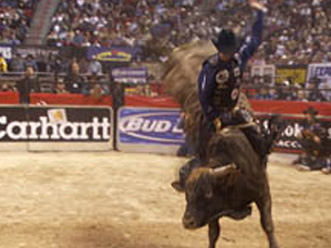 Shot on location in Las Vegas, Nevada, RANK takes us from the ranch to the arena for the struggle of the three highest ranking bull riders competing for the title of Professional Bull Riding World Champion. Even if you have zero interest in bull riding, you’ll be won over by the film’s skillful storytelling and beautiful cinematography. From the filmmaking team that made THE SMASHING MACHINE (HBO), this film won acclaim at the SXSW and Full Frame film festivals.

About Director John Hyams:
Beginning his career in the fine arts, John Hyams graduated from Syracuse University School of Visual and Performing Arts, earning the university’s top awards in painting and sculpture. He went on to exhibit and sell his work in Los Angeles and New York before turning his attention to film. In 1997 he wrote, directed and produced his first feature, “One Dog Day,” which debuted at the Taos Talking Pictures Film Festival and went on to enjoy critical and cult status. His second film, the internationally renowned documentary “The Smashing Machine,” penetrated the world of Mixed Martial Arts fighting. It premiered at the 2002 Tribeca Film Festival, and headlined the 2003 season of HBO’s acclaimed series “America Undercover.” In 2003 he directed and edited the documentary “Fight Day,” about Mixed Martial Arts legend Renzo Gracie. Since 2003, he has directed and produced network series television, notably the ABC series “NYPD Blue.”