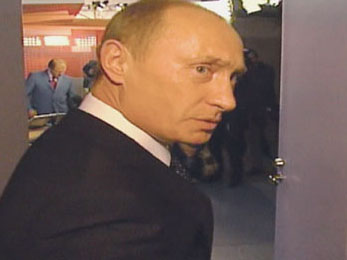 Andrei Nekrasov~s Rebellion: The Litvinenko Case contains a withering indictment of the current state of Russia under Vladimir Putin. At the same time, it is a fascinating portrait of the former KGB agent who was fatally poisoned in London last year. Nekrasov had full access to Alexander Litvinenko when the latter fled to London after holding a press conference in Moscow accusing the Russian secret service of a series of misdeeds. The film is full of other equally revealing testimonies “~ such as an interview with Anna Politkovskaya, the investigative journalist killed in Moscow in 2006 “~ as well as clandestine video footage and news broadcasts showing the police at work.

Chief among Nekrasov~s accusations is that Russia today is essentially being run by the Federal Security Service (FSB), the heir to the KGB. He makes a compelling case that freedom of speech is being shut down, that the famous 1999 bombings of an apartment building in Moscow by Chechen terrorists was in fact instigated by the FSB, that the Chechen war is a convenient cover for the FSB to engage in further crackdowns and that Russia is completely corrupt from top to bottom. Interviews with Litvinenko provide much of the substantiation for the film~s arguments. The former secret agent grew tired of what he saw around him and, along with a number of others from the FSB, started to speak out. He was eventually poisoned with radioactive polonium-210. Earlier this year, British authorities laid charges against Andrei Lugovoi. Amazingly, when Nekrasov interviewed Lugovoi before his indictment, the latter offered the filmmaker a cup of tea after explaining how it is possible to poison someone by lacing the beverage with polonium.

The film has an urgent, hurried, covert feel. Nekrasov scratches well beneath the surface of contemporary Russia, accusing Putin of ordering the murders of opposition figures, laundering money, harassing wealthy Russian businessmen like Boris Berezovsky who publicly oppose his policies, and generally creating an atmosphere of fear and oppression designed to crush opposition. This bombshell of a film pretends no objectivity; it speaks a j~accuse against the state of present-day Russia.

About the director:
Andrei Nekrasov was born in St. Petersburg. He studied at the St. Petersburg State Theatre Art Academy, L~Universit~~ Paris and Bristol University. He directed several documentaries and television programmes before making his first dramatic short, Springing Lenin (93). His feature-length films include the fictional Love Is as Strong as Death (97) and the documentaries Lubov and Other Nightmares (00), Disbelief (04) and Rebellion: The Litvinenko Case (07).