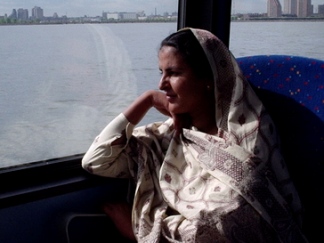 Every day, horrific things that happen in the world evade justice. Shame is the story of a courageous woman who fought back. In the summer of 2002, in a remote village of Pakistan, thirty-year-old Mukhtaran Mai~s life changed when the village~s tribal council sanctioned a punishment against her for a crime allegedly committed by her younger brother. Following the tribal custom of “honour for honour,” Mai was gang-raped and then publicly paraded around as an example.

Her family cowered in shame. The village shunned her. Normally the only recourse for such a woman would be suicide. Instead Mai set out to seek justice and shook the very core of Pakistan~s decaying judicial system. In her quest, she endured public scrutiny and exposure to the alien world outside her village, losing friends, family and her life as she knew it.

The international press and human-rights workers turned her case into a cause. The Pakistani government paid her reparations, which she plunged into a school to give local children the education she never had. Even the children of her attackers were enrolled. She was flown around the world to receive awards and speak on women~s rights.

Numerous reporters covered her case, but rarely with as much sensitivity and dedication as director Mohammed Naqvi brings in Shame. Coming from a Pakistani background, Naqvi is alert to all the cultural complexities at stake. He deftly explores the machinations of local and national politics around the case. Public officials alternately by offer and withdraw their aid. The perpetrators get let out of jail. We follow her on a trip to the United States, where the good intentions of her supporters can~t make up for a vast cultural gap. Back in her home village, her neighbours begin to resent all the attention she receives, even while their children attend her school.

Throughout this incredible journey, Mai maintains an astonishing resilience and belief in herself. Journalists may visit less frequently, but her work “~ and the work of women like her “~ is not yet over. There is still plenty of shame to be faced and conquered.

About the director:
Mohammed Naqvi was born in Montreal and grew up in Canada, the United States and Pakistan. His short films include Time (99), Night (99) and Hide (04). He also directed the documentary Terror~s Children (03). Shame (06) is his first feature-length documentary.