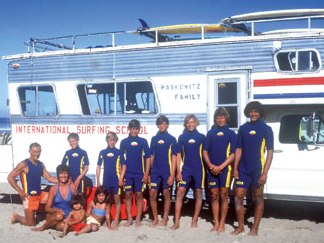 If the Paskowitz family weren~t for real, you couldn~t make them up. Dorian, the family patriarch also known as “Doc,” left a lucrative medical career in Hawaii in the fifties to follow his twin passions “~ a natural, healthy lifestyle and surfing. He became a legendary surfer, introducing the sport to Israel before returning to the United States where he married a Mexican beauty named Juliette. They had eight sons and one daughter, and together the family travelled the coasts in a small camper van, searching for new waves to conquer. Photographs of the clan “~ lined up together with broad smiles “~ are striking; they look like the Partridge Family in wetsuits. But as the film delves beneath the surface, the reality gets a lot more complicated.

Director Doug Pray has made a career of skilfully exploring subcultures and their members, such as DJs in Scratch or truckers in Big Rig. He directs with a stylish verve, artfully using music and graphics to enhance his storytelling. In Surfwise, he combines a rich tapestry of archival footage with modern content, interviewing the Paskowitz parents and all nine children: David, Jonathan, Abraham, Israel, Moses, Adam, Salvador, Navah and Joshua (in chronological order). In the words of the youngest, Doc was trying to repopulate the world with Jews. Despite the large cast, Pray masterfully establishes the individuality of each family member as their dramas, both past and present, are revealed.

Doc eschewed conventional wisdom and institutions, home-schooling his kids with an authoritarian philosophy. Swimming with sharks wasn~t considered dangerous, recalls one son, but school was. Doc had a robust sexual appetite “~ “fucking to me is the word of God” “~ that he frequently indulged with Juliette, despite the proximity of their children. The family camaraderie had an idyllic aspect until the children grew up, broke away and ventured into a society for which they weren~t prepared. A few Paskowitzes wound up as champion surfers, others became rockers (recording a hit song as The Flys) and others struggled. As the oldest son, David, puts it, “When we had nothing, we were in complete, cultist bliss. When we started to want something, that~s when it hit the fan.”

About the director:
Doug Pray was born in Denver, Colorado, and earned an M.F.A. from the University of California, Los Angeles~s School of Theater, Film and Television. In addition to directing music videos and commercials and working as an editor, he has made numerous feature-length documentaries, including Hype! (96), which won the award for best documentary at the Seattle International Film Festival. His other films are Scratch (02), Red Diaper Baby (03), Infamy (06), Big Rig (07) and Surfwise (07).