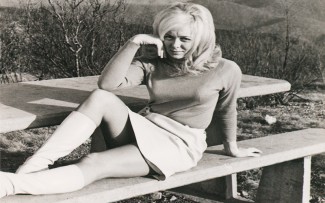 Errol Morris has a way with obsessive personalities. In Tabloid, he expands his collection of larger-than-life characters with an absurdist story that starts weird and just gets weirder. When I tell you the director is Errol Morris and the title is Tabloid, what more do you need to know? In this case, the less you know the better. At the center of the story is Joyce, a former beauty pageant queen with an IQ of 168. Her life’s twists and turns shouldn’t be spoiled. Let’s just say her story involves cultish behavior, false identities and lurid sexual acts. You might call the film a love story, Morris’s first since Gates of Heaven.

Within this context, Morris grapples with a serious issue. Fans of his films The Thin Blue Line, about an innocent man on death row, and Mr. Death: The Rise and Fall of Fred A. Leuchter, Jr., about a Holocaust denier, will recognize a thematic link: people lie, newspapers lie, documents lie, photographs lie. So how do we uncover the truth? In Tabloid, no one comes off as entirely trustworthy, whether motivated by passion, money, religion or fame. Morris interrogates them using the Interrotron, a customized teleprompter that projects Morris’s face in front of the camera so that his subjects must look simultaneously into his eyes and the lens. It’s one of Morris’s signature touches, along with his exquisite sense of production design and undercurrent of dark humour.

In a director’s statement, Morris writes, “Tabloid is a return to my favorite genre &”8211; sick, sad and funny, but, of course, it’s more than that. It is a meditation on how we are shaped by the media and even more powerfully, by ourselves. Joyce is a woman profoundly influenced by her dreams and, in a sense, she was living in a movie long before she came to star in my film.”

About the director:
Errol Morris was born in Hewlett, New York and studied at the University of Wisconsin-Madison, Princeton University and the University of California, Berkeley. After directing his first two features, Gates of Heaven (78) and Vernon, Florida (81), he worked in New York City as a private detective. Our perception of the non-fiction film has been indelibly altered by his highly original feature documentaries. They include The Thin Blue Line (88), A Brief History of Time (91), Fast, Cheap & Out of Control (97), The Fog of War: Eleven Lessons from the Life of Robert S. McNamara (03), which premiered at the Festival and won the Academy Award&”174; for best documentary feature, Standard Operating Procedure (08) and Tabloid (10).