THE LOVE WE MAKE 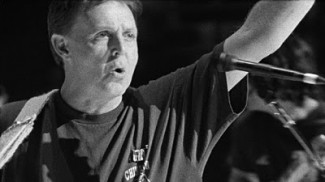 On the morning of September 11, 2001, Paul McCartney was in New York City on an air&”173;port runway waiting to fly to Britain. As he absorbed the news of the unfolding tragedy, he wondered, “What can I do?” The answer, of course, lay in music.

McCartney reached out to master docu&”173;mentarian and long-time friend Albert Maysles, inviting Maysles to document his personal experiences on 16mm black and white film, a format seldom used in the digi&”173;tal age but of proven endurance and artistic quality. Over several weeks in October 2001, Maysles’ camera followed McCartney as he prepared for The Concert for New York City, a benefit he helped organize to uplift New York City during this period of uncertainty and vulnerability. The footage went unseen for years, requiring the passage of time to be put in perspective. Now, ten years later, Maysles, his directing partner Bradley Kaplan and editor Ian Markiewicz have emerged with an intimate work that explores the role of art and artists in a time of crisis.

This Mavericks event presents the world premiere of The Love We Make, followed by a live discussion with Maysles, Kaplan and members of their production team. McCartney, who can’t attend the Festival due to prior commitments, has pre-recorded an exclusive introduction to the film.

McCartney’s choice of Maysles renews a connection that dates back when The Beatles’ first trip to America in 1964. Albert and his brother David captured that historic visit in their pioneering observational style on 16mm black and white film for What’s Happening! The Beatles in the U.S.A.

Trained as a psychologist, Maysles has an uncanny ability to get beneath the surface of the people he films. That is put to good use in post-9/11 New York. We follow McCartney onstage and backstage at Madison Square Garden, as a who’s who of celebrities puts on a show. Inside this event, Maysles reveals a more candid side of individuals as they process a mix of anxiety and resilience in the aftermath of September 11.

About the directors:
Albert Maysles was born in Boston. He studied at Syracuse University and Boston University. His films include Meet Marlon Brando (65), Salesman (68), Gimme Shelter (70), Grey Gardens (75) and The Beales of Grey Gardens (06), all of which were co-directed with his brother David Maysles, and The Love We Make (11), co-directed by Bradley Kaplan.

Bradley Kaplan graduated from Brown University. He directed the television documentaries Muhammad and Larry (09), More Than a Paycheck: Hardest Working Americans (10) and Close Up: Photographers at Work &”8211; “Portraits” (11). He is the co-director, with Albert Maysles, of The Love We Make (11).