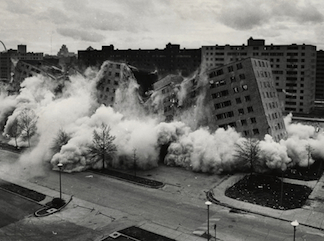 It began as a housing marvel. Two decades later, it ended in rubble. But what happened to those caught in between?

The Pruitt-Igoe Myth tells the story of the transformation of the American city in the decades after World War II, through the lens of the infamous Pruitt-Igoe housing development and the St. Louis residents who called it home.

At the film’s historical center is an analysis of the massive impact of the national urban renewal program of the 1950s and 1960s, which prompted the process of mass suburbanization and emptied American cities of their residents, businesses, and industries.

Those left behind in the city faced a destitute, rapidly de-industrializing St. Louis , parceled out to downtown interests and increasingly segregated by class and race.

The residents of Pruitt-Igoe were among the hardest hit. Their gripping stories of survival, adaptation, and success are at the emotional heart of the film. The domestic turmoil wrought by punitive public welfare policies; the frustrating interactions with a paternalistic and cash-strapped Housing Authority; and the downward spiral of vacancy, vandalism and crime led to resident protest and action during the 1969 Rent Strike, the first in the history of public housing.

And yet, despite this complex history, Pruitt-Igoe has often been stereotyped. The world-famous image of its implosion has helped to perpetuate a myth of failure, a failure that has been used to critique Modernist architecture, attack public assistance programs, and stigmatize public housing residents.

The Pruitt-Igoe Myth seeks to set the historical record straight. To examine the interests involved in Pruitt-Igoe’s creation. To re-evaluate the rumors and the stigma. To implode the myth.