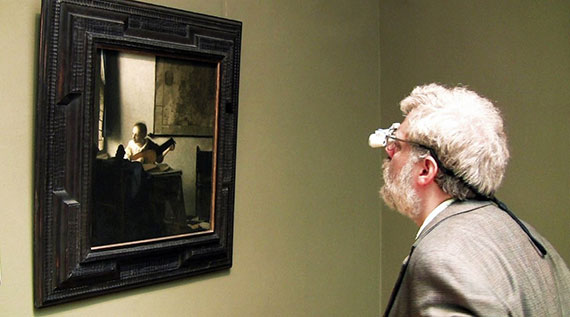 Renowned illusionists and professional debunkers Penn & Teller unite for this documentary investigation into the mysterious methods of Dutch Master Johannes Vermeer, whose photo-realistic paintings predated the invention of the camera by 150 years.

For centuries, the paintings of Dutch master Johannes Vermeer have left viewers awestricken. Art historians describe his radiant style, far ahead of his contemporaries, as “painting with light.” What was his secret?

Naturally, that mystery would draw the attention of Penn & Teller, the magic duo with a penchant for exposing other people’s tricks. In Tim’s Vermeer, they document the obsession of their friend Tim Jenison, a successful inventor of computer graphics equipment, who sets out to prove a theory. Tim’s mission: to paint with his own hands a replica of Vermeer’s The Music Lesson — a tableau of a woman and her teacher at a harpsichord — which normally hangs in Buckingham Palace out of public view.

Tim is working off hunches posited in the books Secret Knowledge by David Hockney and Vermeer’s Camera by Philip Steadman. Both authors appear in the film. They suggest that Vermeer may have worked with a camera obscura to project an image onto a canvas. Where their theories fall short, Tim advances ideas of his own. With Teller as director and Penn appearing on camera, they follow Tim’s quest for over a year. In his painstaking efforts to stay authentic, Tim grinds pigments and crafts lenses using seventeenth-century technology; and transforms a Texas garage into a replica of Vermeer’s Delft room. By the time he’s ready to paint, enormous amounts of time, energy and resources are at stake, with the cameras rolling on what comes next.