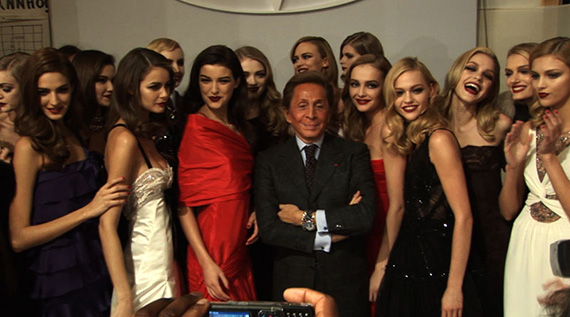 This documentary, spanning the period between Valentino’s seventieth birthday and his final couture show, is of course concerned with showing his contributions to his field. But the film actually aims not for the head, but the heart. At the centre is a love story: the fifty-year relationship between Valentino Clemente Ludovico Garavani and Giancarlo Giammetti, his business partner, lover, best friend and confidante. Older gay European couples are not exactly known for their tell-all personalities, so this careful lifting of the veil gives us a sense of the unusual strength and courage these remarkable men needed to navigate the brutal world of egos and high finance “~ and to do so together. Their moments onscreen are touching, joyous and heartbreaking. Their five dogs (all pugs! chic!) are a constant delight.

This emotionally rich backbone contextualizes Valentino’s relationship with fame. There is no shortage of high-wattage celebrities floating through the film. It has ever been thus with him; Jackie O. herself married Onassis in a Valentino gown. But the filmmakers are careful to note that the glitterati deal with Valentino as an artist and as part of a relationship. It renders their crazy world “~ his house in the United Kingdom and its staff are not to be believed “~ that much more human and intimate.

About the director:
Matt Tyrnauer is a New York-based writer and filmmaker. He has worked for Spy magazine and The New York Observer, and is currently Special Correspondent of Vanity Fair. His book Una Grande Storia Italiana: Valentino Garavani was published by Taschen in 2007. Valentino: The Last Emperor (08) is his first feature documentary.