YOUSSOU N~DOUR: I BRING WHAT I LOVE 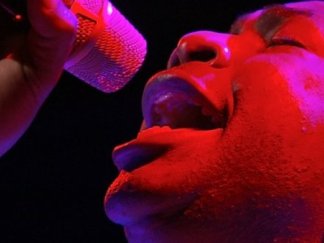 One of Africa’s most prominent musical exports, Youssou Ndour’s distinctive tenor voice became known internationally through a string of popular tracks, including collaborations with Peter Gabriel and the hit “7 Seconds” with Neneh Cherry. Ndour has used his fame to draw attention to a range of political issues, from human rights at Amnesty International concerts to global poverty at Live 8. In 2007, Ndour was listed as one of Time Magazine’s one hundred most influential people in the world.

Several years in the making, this remarkable film follows Ndour as he releases the deeply personal album Egypt as an expression of his Islamic faith “~ a bold move when many in the West equate Islam with extremism rather than tolerance and compassion. In his home country of Senegal, the album poses a different problem: as the singer’s brother Bouba puts it, a DJ cannot easily play a song about Allah and follow it with another titled “G-Spot.” Moreover, Ndour becomes the centre of controversy when religious conservatives in Senegal denounce his decision to perform during the holy month of Ramadan, also deeming the album blasphemous. Director Chai Vasarhelyi marshals a talented crew “~ filming in Africa, Europe, the United States and the Middle East “~ to tell the story of how Ndour rises to these challenges and eventually wins over audiences both at home and abroad.

For devoted fans and first-time listeners alike, Ndour’s performances are captivating, from the wild atmosphere at his nightclub in Dakar, Senegal, to the spiritual mood at a festival in Fez, Morocco. The film contextualizes the Egypt album and explores its diverse influences, which include legendary Egyptian singer Umm Kulthum, the pacifist anti-colonial leader Cheikh Amadou Bamba and Senegal’s holy city of Touba, where one million Muslims make an annual pilgrimage. Ndour’s warm presence is a constant pleasure; he makes an excellent guide, continuing the West African griot storytelling tradition passed on by his grandmother on an international scale. All that effort pays off in an experience that will broaden your horizons.

About the director:
Chai Vasarhelyi started her first documentary film, A Normal Life(03, co-director), in the summer between her junior and senior years at Princeton University. The film went on to win the Best Documentary award at the 2003 Tribeca Film Festival. Youssou Ndour: I Bring What I Love (08) is her second documentary feature.