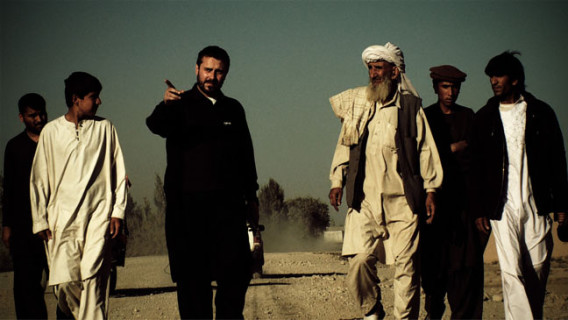 This week Richard Rowley’s DIRTY WARS, an analysis of U.S. foreign policy in the post 9/11 era based on the reporting of journalist Jeremy Scahill, opened at theaters. At the New York Times, Stephen Holden bestowed the film with a coveted Critic’s Pick. Writing for Indiewire, Anthony Kaufman shared his own take on the film, while Peter Knegt reported that the film had strong box office numbers over the weekend. Kaufman also penned a piece on the film for the Village Voice. And R. Kurt Osenlund had an interview with Rowley for Filmmaker Magazine.

Kaufman in his weekly Docutopia post at the SundanceNOW blog took note of the fact that war-themed docs are on a slight rise.

A new Ken Burns project for PBS based on the book “The Emperor of Maladies: A Biography of Cancer” by Siddharta Mukherjee was announced this week. The Hollywood Reporter reported details on the new three-part film, while David Bauder reported on the project for the AP. Madeline Raynor also reported the news at Indiwire.

At Filmmaker Magazine, Scott Macaulay noted the role filmmaker Laura Poitras had played in the NSA domestic espionage stories that broke this week. Poitras filmed an interview with whistle blower Edward Snowden for the Guardian. Her past filmmaking has caused her to be repeatedly detained at the U.S. border (reported last year in Salon).

The editors of the Tribeca Film Festival blog noted some of the docs screening at this year’s Human Rights Watch Film Festival, including PUSSY RIOT: A PUNK PRAYER and WHICH WAY TO THE FRONT LINE FROM HERE? THE LIFE AND TIME OF TIM HETHERINGTON. Clark Collis at Entertainment Weekly interviewed PUSSY RIOT directors Mike Lerner and Maxim Pozdorovkin. Two members of Pussy Riot recently visited New York City and were interviewed by Melena Ryzik for The New York Times. Irina Aleksander also wrote about their visit for New York magazine.

At the POV blog, guest blogger Abi Wright shared five takeaways from the “Future of Documentary Storytelling” panel at the recent New York City chapter Meetup of the Online News Association (ONA). Also at POV, Tom Roston highlighted two docs he thought might suffer because of their titles: FUCK FOR FOREST and MENSTRUAL MEN (although in this case it seems to have won them some press).

The documentary community lost Robert West, one of the cofounders and executive director of Working Films, to brain cancer this week. Judith Helfand remembered West in a post for the POV blog, while the ITVS Beyond the Box blog also paid tribute to West’s contributions to documentary filmmaking.

Robert Greene stirred up a Twitter debate with his suggestion that an award go for the best performance in a non fiction film.

At the What (Not) to Doc blog, Basil Tsiokos provided overviews of both the Sheffield Doc/Fest and the Encounters: South African International Documentary Film Festival.

Writing for the UK’s DocGeeks blog, filmmakers Andy Heathcote and Heike Bachelier described their attempts to find funding for their project THE MOO MAN. And Alexandra Zeevalkink penned a post on the DocHouse events for June.

Over at the Seattle Post-Intelligencer, Tim Hall interviewed director Bill Siegel on his project THE TRIALS OF MUHAMMAD ALI.

Brook Barnes of the New York Times wrote a piece on some of the subjects from the film 20 FEET FROM STARDOM from director Morgan Neville. Mekado Murphy at the Times wrote about the film’s opening title sequence.

Alex Gibney this week held a Reddit AMA, taking questions on the film WE STEAL SECRETS: THE STORY OF WIKILEAKS.

Back at Indiewire, Eric Kohn reviewed the film EVERGREEN: THE ROAD TO LEGALIZATION from director Riley Morton on efforts to make marijuana legal.

At Film.com, Daniel Walber highlighted three films that address gay rights in Africa in some way: GOD LOVES UGANDA from Roger Ross Williams; CALL ME KUCHU  by Katherine Fairfax Wright and Malika Zouhali-Worrall; and BORN THIS WAY from Shaun Kadlec and Deb Tullman.

Justin Rocket SIlverman wrote up the new film HEY BARTENDER in a piece at the New York Daily News, whle Nick Schager reviewed the piece for The A.V. Club.

Over at the Documentary Channel, Christopher Campbell took note of some of the films hitting the theater. Campbell also posted new documentary trailers that hit the web this week.

That does it for this week. Please keep sending suggestions and recommendations here, or tweet them to @GuerrillaFace. Thanks, and have a great week!