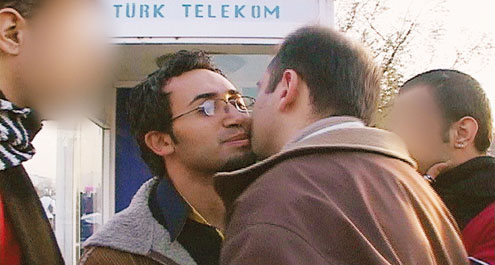 The people in Parvez Sharma~s new film have a lot to teach us about love. Their pursuit of it has brought them into conflict with their countries, families and even themselves. Such is the quandary of being both homosexual and Muslim, a combination so taboo that very little has even been documented on the subject. Indian Muslim director Sharma bravely enters these territories by illuminating multiple stories as diverse as the many worlds of Islam. Often he filmed in secret when obtaining government permission was not an option.

In the Western media, the concept of jihad is often narrowly equated with “holy war.” However, the literal Arabic meaning is “struggle” or “to strive in the path of God.” We meet several characters in this film engaged in their personal jihads for love. The journey takes us from the Middle East to Europe to South Asia and beyond. In South Africa, the imam Muhsin Hendricks faces condemnation when he publicly comes out of the closet. In Egypt, where homosexuality is outlawed, a young man named Mazen has to flee after being imprisoned and tortured following the well-publicized 2001 raid on Cairo~s “Queen Boat.” Once in Paris, he befriends lesbians from other Muslim countries, and their bonds help to supplant the families left behind.

Where there is struggle, there is also hope. We find a Muslim mother in Turkey accepting her grown daughter~s lesbian partner. And four gay Iranian men seek asylum in Canada, a quest that delivers one of the film~s most emotional moments.

As a Muslim, Sharma makes the film from within the faith, depicting Islam with the same respect the film~s subjects show for it. Producer Sandi DuBowski previously explored similar issues within the Orthodox Jewish community in his acclaimed 2001 documentary, Trembling Before G-d.

For non-Muslims, A Jihad for Love offers a unique look into the complexities of one of the world~s fastest-growing religions. The film works to bridge religious divides and to portray the humanity of its characters. No matter what you believe or where you come from, this film will remind you that we are all engaged in the same struggle “~ for love.

About the Director:
Parvez Sharma was born and raised in India. He has Masters~ degrees from both the Jamia Millia Islamia University in New Delhi and American University in Washington, D.C. He has worked as a journalist and an instructor of anthropology and communications at American University. A Jihad for Love (07) is his first feature film.